This piece is revised from an earlier version written upon Neil Armstrong's death. 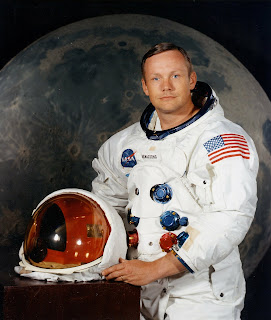 When Neil Armstrong died on August 25, 2012, I wondered if maybe, beyond the moon and well into the heavens, my dad had already given Armstrong a handshake or a friendly pat on the back.

I turned ten the summer of 1969 that the American astronaut took that giant leap for mankind, which, being young and a child of JFK's  New Frontier, seemed a perfectly natural event.

We were vacationing in the New England seaport town where my mom grew up--catching up with cousins, body surfing at Hampton Beach, and squealing with both horror and delight through visits to the lobster pound. The banded claws didn't convince us that the creatures wouldn't break through the brown paper bags on the floor in the back of the car, crawl up onto the seat, pinch our sunburned skin and never let go.

One thing I'd really looked forward to on that trip was seeing my Red Sox game at Fenway Park--Carl Yastrzemski, Tony Conigliaro, Carlton Fisk... But when the day came, the executive decision came down. Our household was not a democracy. There would be no Green Monster for me. So, baseball fan or not, for my dad it was like, "Holy crap! A man is going to walk on the moon!" For me it was more like, "Of course. Why wouldn't a man walk on the moon?"

Dad was born to Irish immigrants in New York City in 1922. Obviously he grew up without television. He sailed, not flew, to Europe and back when he was in his thirties. I would guess his image of space travel was formed by comic book aliens or Orson Welles iconic radio broadcast of War of the Worlds. 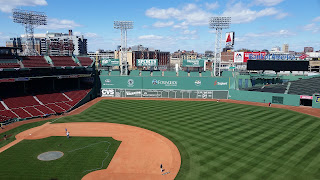 "We're going to stay here and watch a man walk on the moon!" my dad insisted. I was disappointed about missing the ballgame but soon yielded to the excitement around me, joining the masses around the world as Neil Armstrong backed down a ladder, planted our flag and bounced around on the lunar landscape. I can still see the staticky, grey-scale images on Uncle Raymond's then-fancy, now-vintage, console TV.

It was hard to put history into perspective since I'd barely lived a decade on this planet. The moonwalk was cool and all, but it wasn't until well into my adulthood that I truly appreciated what that moment must have meant to my dad, a man whose generation may have been the first to say "What'll they think of next?!"

I still haven't made it to Fenway, but Neil Armstrong's "small step" is no longer lost on me and, much to my children's eye-rolling amusement, hardly a day goes by when I don't look at my iPhone and say, "What'll they think of next?"
Posted by Mary Novaria at 12:00 PM