There's a meme going around, the one with two precious little girls in frilly, white matching outfits. One of them stands on the bathroom scale while the other says, "Try again without the socks." 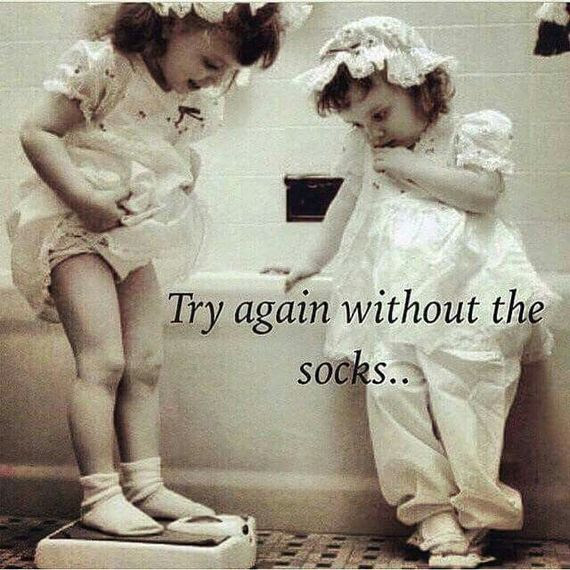 It's meant to be cute and funny and, on the surface it is. I'm sure I've "liked" it more than once (along with tens of thousands of other women) as friends have posted it on Facebook, maybe even LOL'd or ha ha'd in the comments, because who among us has not commiserated with a girlfriend about our weight?
One particular day, though, I got on my own bathroom scale and when the image of those two angelic preschoolers popped into my mind I was angry. Maybe the meme is just as much about friendship as weight, but I couldn't stop thinking about the heavy implications. What is cute or funny about these adorable creatures obsessing about a number on the scale? Feeling even at the tender age of 3 or 4, that they shouldn't weigh what they weigh? Have they already been told they have chubby cheeks or chunky thighs or baby fat? I wonder, if they're worried about it now, what it's going to be like for their teenage selves, their postpartum selves, their peri- and post-menopausal selves... Because, for a lot of us, even after treatment and therapy and 12-Step programs and reading Geneen Roth, this shit never entirely goes away.
This is not new information: When girls are shamed about their weight at an early age, it sets them up for a lifetime of struggle with body image, self-esteem and their relationship with food.
I learned early on where Mommy stashed the "forbidden fruit." I could ferret out those Ho Hos from their hiding place in a kitchen cupboard and also sneak one of the Pepperidge Farm Milano cookies that were reserved especially for my dad. As a young girl, my father playfully pinched the flesh at the bend of my knee -- obviously it was fat that shouldn't be there. I was admonished to clean my plate because children were starving in China, but also asked if I really needed that second dinner roll or was I sure I wanted the ice cream for dessert. Fatty fatty two-by-four couldn't get through the bathroom door...
So along came the diets -- my favorite being the one in college where I had no breakfast, a Kit Kat bar with a Diet Coke for lunch, and a "sensible" dinner. There was starving and bingeing and purging; there was money spent on Weight Watchers and Slim4Life and gym memberships and Spanx. I am not alone. A SELF Magazine/University of North Carolina study found that 75 percent of American women have some form of disordered eating.
There is occasionally some sanity to the whole issue of food and weight. The clarity comes and goes. By the grace of God I'm sane most days now, but then there's a day when for some reason I make the choice to get on the scale even though I suspect the sodium from last night's tacos is going to screw me over and, by the way, I've gained six pounds since my mother's death in August. And then, there I am, feeling like a preschooler wondering what I can do standing there in that moment to change the number staring up at me in the bathroom.
Then I remember something Anne Lamott said: Getting on a scale is like asking Dick Cheney to give you a sense of your own self-worth. That scale -- the one we love when it tells us what we want to hear -- is a betrayer. It tricks us into thinking that some digitized numbers we see between our toes in the morning have anything to do with who we really are. We have allowed that scale to be our nemesis, a reason for dreading doctor visits and the cause of entirely too much self-loathing and morning-after self-flagellation.
Today, I'm sick of it. Exhausted by the battle. It may last a day, a week or a month, I don't know, but I'm taking a break from the scale. Which is not to say I'm giving myself permission to make unhealthy, insane choices or go on a juice fast or the Kit Kat diet. I'm going to trust myself to do what I know works best for me without using my scale as a hall monitor.
I haven't lost my sense of humor and I know there's plenty of fun to poke and much merriment to be made when it comes to dieting and weight. Yes, those girls in the meme are so stinkin' cute and "ha ha" we all get the joke. But here's why it's not funny: Even when we know intellectually that our worth is not defined by a number on a scale, for too many of us, there is a dark place deep down in our hungry hearts that still doesn't believe it. And the reason we don't believe it is because we've been told differently all our lives, from a very young age. That's not funny ... It's just plain sad.
Follow Mary Novaria on Twitter!