LA: Is the Honeymoon Over? 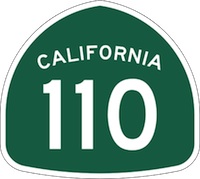 My romance with LA has hit a rough patch. The affair’s not over, but I’m taking a little break to lick my wounds after yesterday’s abuse.

You probably won’t be shocked to learn it involved The Freeway. Traffic is something that’s just part of the lifestyle here, which is one of the reasons we chose to live in a neighborhood where we can walk to just about everything, which I do, frequently with my little-old-lady shopping cart in tow. I’m not afraid of the freeways, I drive on them when I have to. I just don’t happen to like that aspect of the rat race.

Yesterday morning it had taken me only 35 minutes or so to get to the area called La Crescenta-Montrose, a picturesque community tucked in the hills about 30 miles north of Downtown. Little did I know when I left there at 2:15, it would be about three hours before I got home, and it wasn’t even rush hour. (There’s an oxymoron for you. Nothing rushed about it except, maybe, fury.)

Coming into Downtown on the 110 Freeway, the flow of traffic suddenly slowed, then stopped. Now, you always expect some stop and go here, but after a reasonable amount of time at a standstill, this began to feel, well, UNreasonable. I was listening to the local NPR station, which made no mention of the 110 Freeway stoppage in its traffic report. I flipped over to one of the AM News/Talk stations. Again, nothing explaining what was quickly becoming torturous. I heard no sirens, saw no flashing lights. There were no orange signs indicating lane closures. Hours later, I’d find out the cause…

I tried putting my windows down, but then decided there was too much exhaust. In fact a panel van a few cars up was expelling so much smoke I wondered if it had caught fire. Another car in my lane, overheated or something, was stopped and pulled as far to the right as the driver could manage. Another driver got out to peer up ahead, shrugged, and returned to his car.
Tick tock. I was patient, but my serenity was waning. I was hungry. Forgive the indelicacy, but I had to pee. And I was getting a roaring headache. I found some Advil in my purse and washed it down with water (but not too much water) from my Nalgene bottle. I fantasized about dry martinis, hot bubble baths and, for some reason, very rare Ahi tuna. As I continued to flip through radio stations in hopes of some explanation, I began to understand how folks are driven to road rage.

After about an hour and a half, my leg started to cramp up and (this is a little embarrassing) I actually cried a little bit. I was beyond frustrated, almost panicky, kind of claustrophobic. I got Siri to text my daughter Hannah who encouraged me to breathe and assured me I’d get out of this jam soon enough. Good advice! The student has become the teacher.

Once cars began to move, around 4:30 I think, the sun was at that particular angle… you know, heading into sunset and blinding you?  Somehow I squinted my way to The 10 and back to Santa Monica. Relieved, but also disgusted. Soon there was an explanation as my husband saw this notification from LAist on his Facebook feed:

Man Climbs Onto Sign Over 110 Freeway, Traffic Grinds to Halt

According the LA Times, it took 29 firefighters and a SWAT team two hours to coax the guy down. And they’d placed one of those big, balloony cushions across the lanes below… just in case. Click here for a great pic.

Who knows what the guy’s problem was. He was probably he was caught in traffic one too many times. At any rate, the whole situation was what my brother Thom calls “California Crazy.”  And love can be like that, right? I’m still crazy about you, Los Angeles, but I don’t plan on driving on The 110 any time soon.