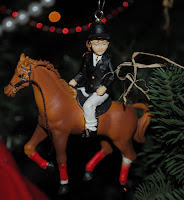 ‘Twas a week before Christmas, and we had just put up our second tree of the season. Not an elegant extra tree, hung with designer ornaments and placed in a room where children aren’t allowed. Nor was it a children’s tree decked with popcorn balls, construction paper garland and those painted dough ornaments from the second grade. This was a replacement tree.

Twenty-four hours earlier, I was musing on the glorious fragrance of pine and the nostalgic unwrapping of tissue from the decorations we’ve accumulated during 20 years of marriage. Several Old World Santas once belonged to my mother-in-law; we nestle them high upon the tree, away from little fingers. Over time, those same fingers have contributed some treasures of their own, like the precious, felt and fur Bishop Nicholas made one year in Sunday school. A couple of other St. Nicks were favors at a holiday dinner party celebrated with dear friends who’ve moved away. A beautiful bone china creche with a gold star on top was a gift from a friend long since gone to heaven. I always remember Ilene when I place it on a prominent branch. A couple of others went up with a prayer this year, for I know their givers may not be around next time we put up the tree.

There’s an accidental angel collection; until the tissue paper came off, I didn’t realize just how many we’ve accumulated. I’ve been more intentional in gathering blond boys with footballs and golf clubs, and redheaded girls with soccer balls and chestnut ponies.

All these heirlooms-in-the-making can’t just go on any old tree, can they? I have been known to drag my family through three counties in search of the perfect tree. Over the river and through the woods, indeed! This year, in an effort to simplify the process, we chose our Douglas fir from a stack outside the local home improvement store. It seemed more than adequate and fit nicely in its assigned corner of the family room. It smelled all piney, and I tried to ignore the needles that were silently piling up on the carpet.

I don't relish stringing the lights. It's a sticky, frustrating job, but someone’s gotta do it, and everyone else around here refuses. Lights up, the garlands of glass beads go next, and then it’s ornament time. As my daughter hangs her favorites on the balding branches, two things cross my mind: I can move those where I want them later, and this tree is going up in flames between now and Christmas Eve. Despite our valiant attempts to rehydrate, this patient wasn’t making it.

By the second night, one of the cats had attempted to water the tree herself, apparently confused by another hearty sprinkling of needles atop the quilted tree skirt.

Does the tree look like it’s leaning just a bit? my husband asked. Not five minutes later, it was TIM-BER, as I shrieked and my daughter vaulted out of the way. An old fragile Santa shattered, along with a few clear crystal bells. We righted the tree, but it was severely disheveled and growing balder by the minute. It was offending my aesthetic senses. Even more, common sense was telling me this tree had to go. After years of resistance, we decided as a family that it was time to get an artificial tree.

Just as we once said we would never move to the suburbs, we had often said we would never buy an ersatz Christmas tree. I had never liked the way they looked, and they lacked that foresty smell I crave this time of year. Like so many artificial things--fake fur and breast implants come to mind--I must admit the trees seem to have improved over the years. Since we bought ours practically at the last minute it was 50 percent off and, better yet, pre-lighted.

It’s a different Christmas tree, but our treasured ornaments and their fond associations have not changed. A little potpourri and some bayberry candles evoke the sacred scent of evergreen, and the tree actually looks pretty real when you squint at it from across the room. I can enjoy it safely, too, knowing that the only thing ablaze in the family room will be the sweet-smelling splits of oak crackling in the fireplace. You know, I wouldn't be caught dead with gas logs.

This story first appeared in the Kansas City Star on December 24, 2003.
Posted by Mary Novaria at 9:33 AM