When you’re traveling with a group of 39 teens, the most asked question—after “Where’s an ATM?”—is “Where’s the bathroom?”

The query is especially urgent with teenage girls on Saturday night in crowd-crazed spots like Piccadilly Circus. Kids are not amused when the response is, “I don’t know; I’ve never been here either.”

Apparently there’s now an app for that. Yes, your iPhone can find restrooms all around the world. (By the way, that was how George Costanza made his post-Seinfeld fortune according to an episode of Curb Your Enthusiasm on HBO.) Trouble is, not everyone, has an iPhone.

It’s generally easier in London, because we (supposedly) share a common language. Fortunately, restrooms everywhere are marked by those international Man/Woman figures, so even if you don’t speak the local tongue you can usually locate a WC, loo, el baño, aseo, toilette or whatever you want to call it, although it may take some sleuthing.

(Worth noting: European toilettes have a different flush mechanism. Occasionally a pull chain, usually a button or valve to push. Some are on the wall, others on the commode. Be flexible!) 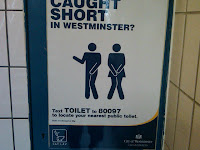 Kudos to the City of Westminster (London) for its assistance in locating the loo. “Just text the word TOILET to 80097 and you will be texted back with the location and opening hours of your nearest public toilet.” Westminster’s website says:

Out all day shopping in the West End? Children desperate for the toilet? We've all been caught short out and about. But in Westminster you don't have to be any more.
Every year 10,000 gallons of urine is at risk of ending up in the city's streets and alleyways through irresponsible and anti-social behaviour.

Elsewhere, near Putney Bridge in London, I saw a father encouraging his young boy to urinate in the street, aiming right at the tire on a car. And we were cautioned not to place our bags down in urine on sidewalks in Spain.

Nearly everyone remembers being told, as a child, to use the restroom before leaving the house for a ride in the car. Even if we swore we did not have to “go,” our mothers would insist we “go anyway.” The wisdom of this becomes clearer the older we get.

My dear, departed mother-in-law was a first-rate world traveler. Never daunted by culture shock, foreign languages or inclement weather, Barbara and her Louis Vuittons trekked to great places on and off the beaten paths of Europe, Asia and the north of Africa. She didn’t bat an eye at riding atop a camel in the desert, an elephant in Nepal, or an unfamiliar horse in Ireland, as long as she could lay her head down in five-star accommodations at night. On a trip with her to Paris when I was in my mid-twenties, I first heard Barbara say, “Always go to the bathroom when you have a chance,” a quote credited to England’s King Charles V. I don’t know the circumstances that led to Charles V’s proclamation, but it’s advice worth taking, especially when traveling abroad.

On that long ago trip to Paris, I remember visiting a public toilet that was literally a hole in a floor, I believe such a setup was called a pissoir. Today, the public WCs in Paris are fairly modern and, while some still require a coin to enter, most are free of charge. Our lovely tour guide Isabelle, however, cautioned that the door will pop open if one sits in the public toilette for longer than 15 minutes.

Last month in Paris, I used a somewhat hidden public restroom that was under renovation on the Ile de la Cité. After creeping down a flight of stairs, I was led to the correct door by a faintly penciled mark of “F” on the wall, which I took to mean it was for Femmes (Women). Still a bit unsure, I was relieved to find I wasn’t the only one in there.

The hotel bathrooms on this recent trip were really nice with big, deep bathtubs—perfect for long, hot soaks after a day of sightseeing. Of course they also had bidets. Perhaps that’s the tradeoff for not providing washcloths. Most of the kids had never seen a bidet, and they certainly didn’t have the remotest idea how to use one. I actually overheard some of the boys saying they had a “duvet” in their bathroom.

Museum restrooms in Europe are pretty good and much cleaner than other public toilets. In fact, I waited at least ten minutes at the Louvre while an attendant slowly mopped the floor as the line of patient women grew. On the other hand, a custodian was practically mauled in the Frankfurt Airport as he tried to enter a tiny WC near the Lufthansa gates. An odd thing in that airport—tiny, two-toilet restrooms with one little sink. Do the fräuleins just hold it, or what? You could tell the American women from their grimaces, heaving sighs and eye rolling over the lack of facilities. Even the glass-enclosed smoking booths were bigger. 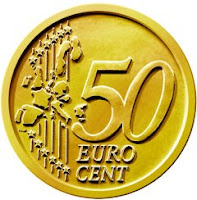 The nicest public restroom we visited was as at the Gare l'Austerlitz in Paris. It cost half a Euro and was worth every cent—clean, modern, pretty sinks and (drum roll, please) toilet paper. Yes, toilet paper is in short supply throughout Europe. A couple of my travel companions decided there’s a fortune to be made in supplying European tourist towns with toilet tissue (and ice cubes, but that’s another story). Happily, I had plenty of little travel packs of Kleenex in my purse and was happy to share them with the girls on the trip.

In Madrid, Barcelona and points in between, there seemed to be the most serious lack of TP. I asked our tour director, a Spaniard, about this. “Um, Dan? No offense to your country, but why are the public restrooms so bad here?”

Dan assured me that even Spanish women have complained about this and that he believes it is because the concept of using public restrooms is a relatively new one in Spain. In other words, traditionally, people have just used the baño at home and not while out and about. If you’re in a restaurant or a bar in Spain and you find you have to “go,” my advice is this: Pick up a bunch of paper napkins on the way in.

Thanks to a French train workers’ strike, we traveled from Paris to Madrid on five buses (not the kind with toilets) and a train (in Spain) over the course of 22 hours. We were asked to limit our fluid intake the afternoon before we left in order to avoid too many “comfort” stops. Naturally this made us thirsty and all-the-more in need of restrooms.

That lovely restroom at the Austerlitz station was but a distant memory when we stopped before daybreak just over the Spain border. The girls’ eyes grew wide as they saw two footholds astride a hole in the floor and a concrete trough for washing up. After sleeping on a bus all night, what’s one more indignity? This made the seatless toilets throughout Europe seem not so bad. Besides squatting is good exercise for the quads, right? And Mom always said you shouldn’t sit down on a public toilet seat, anyway.
Posted by Mary M. Novaria a.k.a. "Mims" at 9:35 AM