The trees in the yard are frosted like vanilla-coconut cupcakes. Pointy icicles hang from the north side of the house. Sometimes I break one off and give it to the dog, like a stick. Today those spiky rods are rock solid, and I wonder, for no particular reason, if they really have been used as weapons. Murder and melt. Evidence gone. Maybe I’ve been watching too many British crime dramas.
In Colorado, snow falls on the roof, then melts, then refreezes. This is called ice damming.
There is also a thing called ice damning.
I made it up after getting stuck near the top of the driveway last week. It was a great introduction to our home for my high school bestie who’d just flown in for the weekend. I stopped the car before reaching the top to aim my remote at the garage door, not realizing there was a layer of ice under a dusting of snow. I swear it hadn’t been there when I left for the airport earlier. When I couldn’t get traction, I began to back down our long, steep driveway. The car skidded into a snowbank, where my uncooperative, left, rear tire settled in. No amount of rocking back and forth would free us. 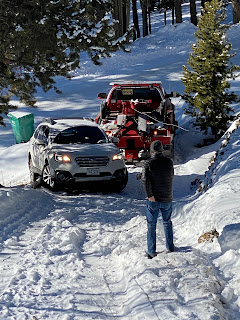 “But you have a Suburu!” another friend said. I know, right?! It’s the only time in three Colorado winters we’ve been stuck anywhere! At least it was at home.
I’m either a bad feminist or a strong woman who knows when to ask for help. It was time to call in the big guns, a.k.a. my husband, John.
John dug out the rear wheel, got in, and put the car in reverse. It slid to the opposite side of the drive, where the rear wheels jumped a railroad tie along the border. Damn ice. I could see my breath when I sighed.
The tow truck – the really big gun – came the next morning to get the car back on track. The rescue procedure was successful, yet complicated. It involved a winch.
Since then, I’ve been thinking a lot about ice.
Blaming the weather and road conditions, our trash hauler didn’t pick up our recycling for six weeks. The container got stuck in the ice at the end of the driveway, and the lid froze in place. Cans, plastics, and cardboard boxes accumulated in the garage, which looked like a back-alley scene from a New York sanitation workers’ strike. 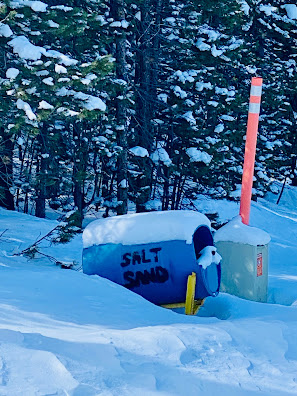 To run errands in Evergreen, we first take a one-mile frozen road to the edge of our neighborhood. There are sand and salt bins on a few of the curves… just in case. We then inch our way out onto a state highway from behind an enormous, glacier left by the snowplow. The twisty, windy road into town often doesn’t get enough to sun to melt the snow and ice, making the slippery, seven-mile trek, especially dicey on the S-curves. My stomach flips any time I have a little fishtail, and I offer silent gratitude to my high school driver’s ed teacher and to my dad, who insisted we learn to drive in Chicago’s lake effect snow, teaching us to never slam on the breaks or overcorrect our steering.
Once in town, the main drag is almost always clear and dry. That’s a marked difference from our place at 9,500 feet, where the dirt road is packed with snow and ice, to the 7,200-foot elevation in town. It’s also sunnier down below. Some days up here, we are literally in a cloud, unable to see the peaks across the gulch. 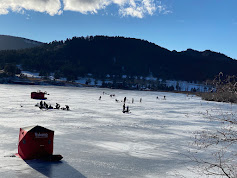 I drive by Evergreen Lake, which is dotted with tents and people ice fishing. Even when there are puddles forming on the surface (yikes), they’re still out there angling for rainbows. Skaters zip around on the far side of the lake, and I think fondly of my childhood. I’m not about to get on ice skates now (because self-preservation), but it was a mainstay of my recreational and social life growing up.
Each winter, our village flooded a baseball field and voila! it became a skating pond. The town also set up a hockey rink. It hadn’t yet occurred to us that girls could play ice hockey. The boys who weren’t channeling their inner Stan Mikita and Bobby Hull, would steal the girls’ hats and skate away, forcing us to chase them. Afterwards, we’d drink hot chocolate in the warming house. 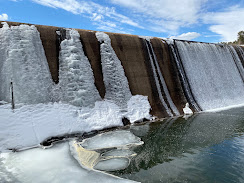 At the edge of the lake, much of the overflow at the dam has frozen into frosty cascades suspended in time. There is a contest here, sponsored by a local Rotary Club, to guess the exact date and time the ice will melt on Evergreen Lake. I have no idea how to predict this, but John has two entries. Wish him luck.
You know when a toddler (or puppy) acts up and you’re a teensy bit upset? You don’t get too angry because you think, “It’s a good thing they’re cute.” That’s how I’m beginning to feel about ice. 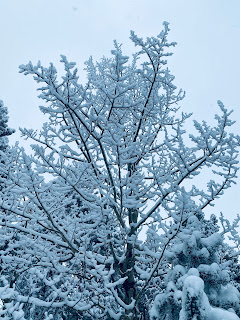 Of course, it’s not great when it catches me by surprise on a sidewalk or a trail, because I have a healthy fear of falling. No, a morbid fear. And yes, despite owning a pair of Yaktrax, my commandment to myself remains: Thou shalt not fall.
But the ice is beautiful, especially when it glistens in the sun or reflects the twinkle of the white string lights on the deck… and when it forms sparkly crystals on the Aspen branches and silvery icicles under the eaves.
Inside, by the fire, wearing Uggs and sipping a hot cup of chai tea, I call a truce. My cold, hard heart is melting.
I like the damn ice… even love it sometimes…  when I don’t have to go outside. 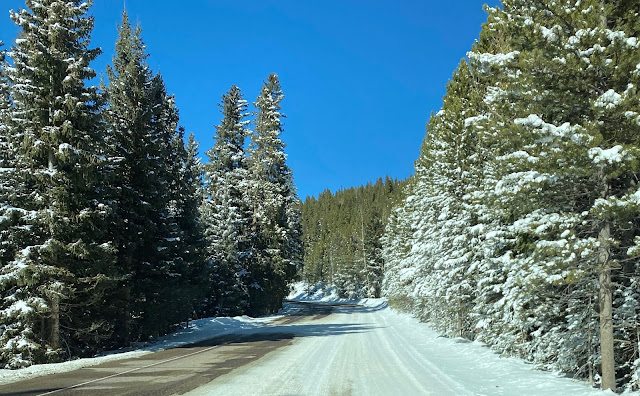