Down the Prairie Dog Hole 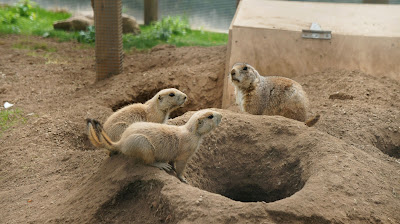 Funny how the mind works and makes connections. Is it just writers who go to wacky places, dredging up long-forgotten memories and burrowing down into the proverbial internet rabbit hole? Or do we all do it?

My friend Judy texted me a story about a wildlife refuge here in Colorado where the prairie dogs have been infected with the plague. Seriously, how medieval is that? The Washington Post story stated: “Though the plague can be treated with antibiotics, it has a dark history.”

And here I’ve been worried about what I would do if a bear comes into the yard while I’m in the hot tub.

Turns out the Rocky Mountain National Wildlife Refuge is clear on the other side of Denver – more than an hour away. So, phew, I don’t need to worry about the Black Death today. You can believe I’ll steer clear of that place until the plague is eradicated. It did get me thinking about prairie dogs, though. 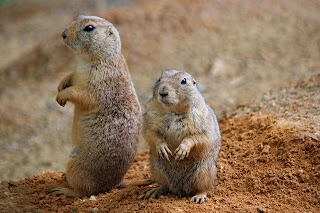 Some years ago, when we lived in Kansas City, a local businessman named Del Dunmire and his wife, Debbie, financed a prairie dog habitat at the Kansas City Zoo. The zoo curated more than a dozen prairie dogs from other facilities.

The trouble began when the Dunmires added their own wild prairie dogs, collected in western Kansas. It was like the Montagues and the Capulets, the Hatfields and McCoys, the Mizzou Tigers and the Kansas Jayhawks. The two tribes did not get along and one of the tamer dogs wound up in the veterinary hospital with wounds and depression.

Ultimately, the zoo shut down the prairie dog display. Undaunted, Dunmire launched his own prairie dog exhibit at his manufacturing plant, opening it for school field trips and the like. But Dunmire’s luck with prairie dogs wasn’t good. One winter morning, all the rodents were found dead in what was surmised to be another “prairie dog war.”

By the way, Dunmire, who died in 2016, had served time inprison for a bank robbery in Kansas before turning his life around and becoming a millionaire and philanthropist. When he and Debbie married in 1986, Dunmire reportedly spent a million dollars on the affair and invited the entire city. 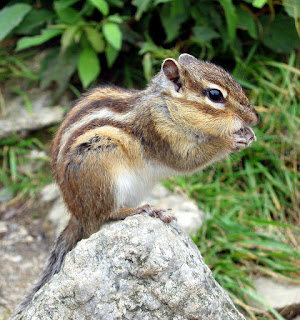 As I write this, I can see the chipmunks keeping busy in the yard. They nibble on the wild grasses and chase each other, occasionally hiding and then popping their heads up like periscopes. Probably not unlike prairie dogs, I think, then Google to see if they’re related.

Prairie dogs are the most social members of the squirrel family and are closely related to ground squirrels, chipmunks and marmots, according to desertusa.com

They are not related to bears. Can you tell I’m plagued by the notion of bear encounters?

Revisiting the prairie dog saga brought to mind a lovely book I read a couple of years ago. My friend Eva gave me Terry Tempest Williams’ Finding Beauty in a Broken World. The book comprises three seemingly disparate sections. The middle section – the one with the prairie dogs – is sandwiched by reflections on creating mosaics in Italy and an account of living among, and building a memorial with, survivors of the Rwandan genocide. Williams somehow makes it all work. 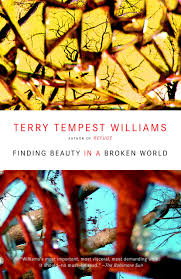 She spent copious hours observing a community of endangered Utah prairie dogs, watching their behaviors and interactions, and drawing conclusions about their society. An author, conservationist and activist, Williams manages to find links and meaning between art and nature and humans.

If any of that is of interest to you, you may find the book an inspiring read, because aren’t we all searching for some kind of meaning in things? I think that’s one of the reasons I burrow down into the world wide web, often on what may be a wild goose chase. I’m seeking connections between things and trying to make sense of the world.

And to think this started because fleas have given Colorado prairie dogs the plague. Now, about those fleas…

In case you missed it, last month I had an essay featured in O, The Oprah Magazine! You can read that piece here.