In the Midst of Big Tragedy, LA Takes on a Small Town Feel 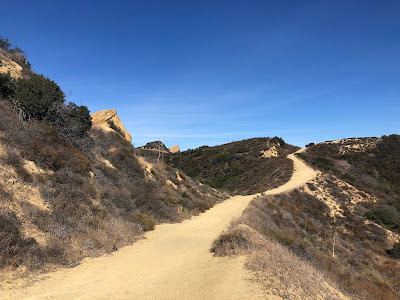 A week before the Woolsey Fire began, I hiked with my cousin Kristen in Topanga State Park. A doe and her fawn greeted us in the parking lot, as though someone had arranged it that way for a Hollywood shoot. The afternoon was warm and clear, offering sweeping views of the ocean and other peaks beyond the Santa Monica Mountains. As our elevation increased, we talked about the terrain — the scrubby chaparral (Was that sage we smelled?) and the parched grey-brown meadows below. 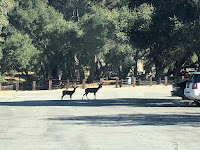 “Was it ever green?” Kristen asked. Our landscape is intriguing for someone who lives in Alaska and still is for me, six years removed from the Midwest.

“Yes,” I said, “after last spring’s rain. I can’t remember exactly when that was.” 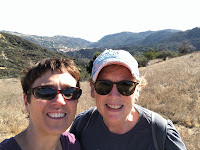 I checked the humidity on my iPhone's Weather Channel app. Twenty-five percent.

“Yeah, it’s a real tinder box,” I sighed, the reality of living in this region of Southern California.

Little did we know the community around us would soon face mandatory evacuations because of fire. I hope those deer are okay. I’ve seen reports of singed and injured wildlife over the last week.

My husband John and I have a short list of “must see” attractions for out of town guests: a hike with a view, a trip to the beach (often followed by cocktails at someplace like Duke’s or Moonshadows) and the Getty Center.*** 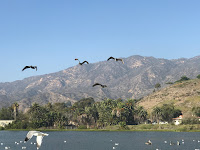 The day before our Topanga hike, we’d gone to the beach in Malibu. We chose Surfrider Beach, partially because of its proximity to us, but mostly to take in the Malibu Lagoon and its myriad shorebirds. Kristen and I have been known to geek out about birds and we got an eyeful: cormorants, pelicans, a great blue heron, egrets, plovers, willets and gulls. 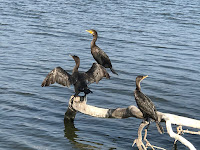 A week later, all of Malibu – the humans anyway – were forced to flee the blaze.

John and I took short walks up the street each evening at sundown to check on the orange glow in the distance. Everyone we saw on the street was friendly, concerned about one another’s welfare. “You okay?” we asked each other, even if we’d never met before. There was a collegial spontaneity to every encounter as we all wondered if we should go now or wait to be told we had to leave our homes. A new neighbor from around the corner told us she had four other families camped out at her house. We joked about having enough wine. 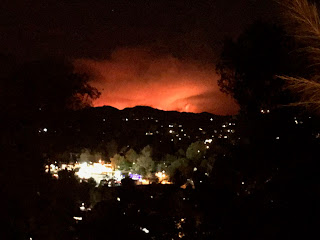 Fire jumped the 101 freeway, crawled down the hills, crossed over PCH and landed on the beaches, I worried about the birds. A great horned owl, forced out of its habitat, reportedly was huddled alone in the sand on Zuma Beach.

John and I kept a close eye on the fires from our Woodland Hills home, not far from Calabasas and Topanga, which were both under mandatory evacuation orders. We packed our bags and we had a plan, thanks to hospitable friends in Pasadena. It’s an odd thing to ponder what to take and a challenge to discern what one truly can live without.

“Do you have a fireproof box for photos and documents?” Kristen asked over the phone. She was back in Anchorage and could see where the fires and evacuations were on the map. “We were right there!” I told her the humidity was now a mere five percent and that the Santa Ana winds were kicking up again. 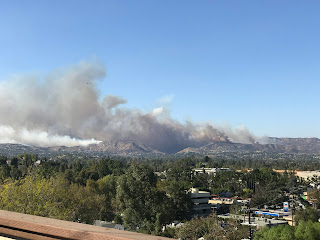 It turns out we do not have a fireproof box, although we do have two earthquake kits — one in the house and one in the car. I tossed my passport into my purse and rued that I still haven’t scanned the kids’ baby photos into the computer. I grabbed a few pieces of jewelry, including my mother’s wedding rings.

It’s easy to think I can live without this or that because my material attachments have not been tested. I viewed the devastation on the news… shells of houses, barns and cars…I ache for those affected, for the destruction of it all. The pet resort we’ve often used to board our dog had to evacuate and people on social media sought help to get their horses out of Malibu. 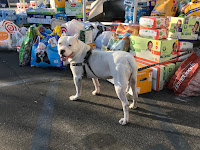 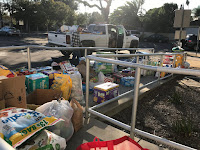 Let’s not forget the mass shooting in Thousand Oaks on the eve of the fire. Friends and their children have danced at the Borderline Bar & Grill, but by the grace of God or the Universe or whatever were not there that night. A community’s collective mourning for twelve souls was interrupted by evacuation and more loss and more grief. How do loved ones even breathe in the midst of this, when an event that should never become an afterthought is eclipsed by the immediacy and urgency of nature, lest we forget we have control over nothing?

My husband and I are fortunate. We have not had to flee fire or dodge bullets. My heart breaks for those I consider my neighbors even though we have never met. I have hiked on their trails, eaten in their restaurants and walked on their beaches. It feels like there is a community consciousness, an awareness of the fragility of life and a willingness to show up with supplies, to rescue pets, to shower one another with love and light, to believe in goodness and forget about blame. For such a vast and sprawling metropolitan area, LA feels small right now. Good small. Hometown small.

Wouldn’t it be great if we could keep it that way?


***We took Kristen to the Getty last time, so we went to the Skirball Cultural Center for the Notorious RBG exhibit. Definitely a “must see” right now in Los Angeles. 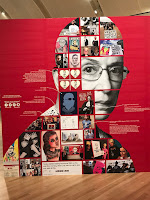 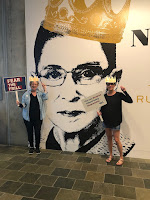