My parents named me after my two grandmothers, Mary and Catharine. I have no memories of my paternal grandmother Mary, who died before I was 2 years old, but Catharine, my mother’s mother, was my beloved Grammy. For most of my childhood we lived a thousand miles from her, but she visited for weeks-long stretches during many summers and occasionally over Christmas. A few times we road-tripped from Chicago to Boston to see Grammy, my mom’s siblings and my cousins.

Grammy loved to get mail.

“Just write and tell me you went uptown and got a stick of gum,” she’d say.

So I would and she’d write back, always slipping in a few dollars she probably couldn’t afford, the same way she did with birthday cards. Regrettably, I didn’t save the letters, but I recently came across one she’d written to my mom.

Isn’t the national campaign crazy? Just now, I think that the best candidate for the Presidency is Robert Dole. Your Dad would be horrified by my choice. He would vote for Mickey Mouse as long as he was a Democrat.

I laughed out loud and a memory surfaced. In 1972 Grammy had proclaimed my grandfather would spin in his grave if he knew the Teamsters supported Richard Nixon. The following summer we watched the Watergate hearings together. When all was said and done, I was hooked on politics and the news business, and rode Woodward and Bernstein’s coattails into journalism school and a lifetime of storytelling.

A first-generation American, Catharine Elizabeth Donahue was the sixth of nine children born to Irish parents who settled in Newburyport, Mass., in the late 19th Century. Grammy’s high school yearbook proclaimed: Catharine’s quite frivolous, talkative and gay... but in her later years, my grandmother was prone to melancholy.

She was rumored to have a feisty, redheaded temper, although thankfully I was never on the receiving end. If my brothers and I acted up, she’d tease us by threatening to get out her shillelagh, an Irish walking stick (and weapon) made of blackthorn, but it was all in good fun.

A family member once shared a few unflattering stories with me; I chose to overlook them because I never saw that side of her. Maybe she was on her good behavior around me. We had fun together. She shared my room when she visited, and loved for me to comb her wavy, yellowing hair while we watched her “stories” on TV on summer afternoons.

Grammy loved pistachio ice cream and apple pie (not together), but she couldn’t bear to sit in the same room if you were cutting, peeling or eating actual apples. She wore dentures, enjoyed her highballs perhaps a little too much, and snored like a cartoon character, often forcing me onto the living room sofa in the middle of the night. She wore Jean Naté and loved clothes, shoes and jewelry, especially hand-chased pieces created at the Towle Silversmiths in Newburyport. A sterling cuff bracelet of hers is one of my most treasured possessions. 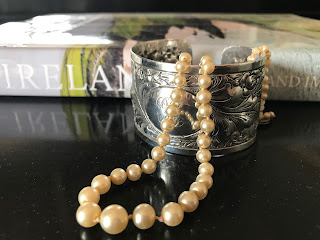 I have a keepsake from my Grandmother Mary, as well. On my twentieth birthday, my parents gave me a string of pearls that had belonged to her. “I’m not sure these are especially valuable,” my mom wrote, “but they belonged to your Grandmother McAleer so that makes them special… I know it would have delighted Gran a lot if you had them.” She had them when she arrived in New York from Ireland in 1906 and I wondered if she’d worn them aboard the Majestic or tucked them away for safe keeping. I know nothing of her style, likes and dislikes, and I don’t remember the lilting sound of her brogue.

My father once mentioned his mother made rice pudding on washday; otherwise, the woman was an enigma until I began to research our family’s genealogy. The fact my father spoke so rarely of his upbringing led me to imagine grim scenarios, but he’s been gone 17 years now, so I missed my chance to do the deep dive into the past with him. Instead I plunged into online records in search of information and understanding. There were mysteries, wrong turns and roadblocks, and more than one big “Aha!” as I slowly turned up records that would give me a better picture of the woman I only knew from old black & white snapshots. What I found, in many ways, is a portrait of loss.

Mary Anne Sheridan appears to have either forgotten or fudged her age on numerous documents, but birth certificates don’t lie. She was born in 1885. I was shocked when I learned she wasn’t born in Ireland. Although an Irishman, her father was a constable for London’s Metropolitan Police Service during the Victorian era. The family lived in Kent, where Mary was the third of five children.

By the time she was 8, she’d lost two little brothers and her mother had died in childbirth, leaving the constable a widower with three young children. He retired soon after and returned to Edgeworthstown in County Longford, remarried and went on to have five more children. I can’t fathom the impact it all must have had on my grandmother, and I’ve often tried to imagine how losing her mother and brothers affected her own parenting. 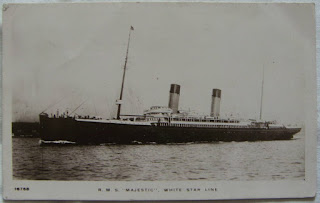 Turns out lots of immigrants share the name Mary Sheridan, so I’ve been unable to confirm her exact whereabouts or occupation in the 1910 census, but it’s likely she worked as a maid.

When she married my grandfather in September 1911, he’d been a widower for just over a year. He’d taken his 5-year-old daughter back to Ireland to be raised by his mother and sister. A 4-year-old son moved in with the newlyweds. They had their first child together the following June, then four more over the next ten years. A 2-year-old died of diphtheria in 1919. His name was John, the same name they gave my father three years later. Mary’s stepson, then 14, died of heart failure following appendicitis in 1921, just six months before my father was born.

I can scarcely fathom the losses. I’m not at all sure my father knew about the sibling deaths that preceded his birth or that he shared his name with a dead brother. He never mentioned any of it. Nor did he tell me his grandfather worked for Scotland Yard or that his parents were wed in St. Patrick’s Cathedral in New York City. Irish working for the British in the late 19th Century? Immigrants off the boat marrying in this iconic shrine to their patron saint? 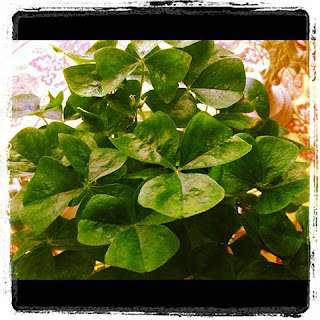 Therein lies the mystery. Were these events kept secret for a reason or were they just not considered noteworthy enough to pass down to children and grandchildren? Regardless, it’s left me yearning to understand the effect of our histories, especially profound losses, on future generations, especially on our roles as parents and children. Do we carry these losses in our DNA? By the grace of God, I’ve not had to endure the tragedies that Grandmother Mary and many other women in my family tree have suffered. Catharine, too, had at least one stillborn baby and a grownup son who completely vanished from her life. I watched the latter break her spirit and her heart.

What I do know is that Catharine and Mary were resilient. Without them, I wouldn’t be here. So on this Mother’s Day, I want to honor my grandmothers, my namesakes, Mary and Catharine, and the all mothers who came before them—the other Marys, a few Catherines, Kate, Nora, Ellen, Johannah, Hanorah, and all the rest of these strong Irish women. We may never have met, but somehow I feel I know them, if only in my heart.