Code Blue: Keeping Up With the Neighborhood Aesthetic May Cause Arrest

A local news station back in Kansas City featured my friend Mary in a story recently because of a dispute she has with the city over a couple of items on her porch. Turns out her small recycling bin and milk delivery cooler offended the aesthetic sensibilities of the neighbor who ratted her out.

Yes, the Missouri-based Shatto Milk Company actually does deliver and some homes still have front porches. My friend has lived in this one for 56 years.

The city threatened Mary with fines of $100 a day and even incarceration for the violations. I’d like to think Kansas City wouldn’t put an 80-year-old woman behind bars for petty code violations and I’m quite sure there are more serious and urgent issues facing the city.  But my idea of appropriate law enforcement activity is not necessarily in line with today’s reality. (I’m looking at you, ICE.)

I wish my friend well; maybe we can have a chat on her porch sometime when I’m in town. Her plight got me thinking about other verandas and yards and infractions far worse than trying to save the planet or having the cream for your coffee delivered to a convenient spot. 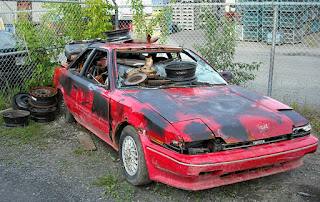 We had a next-door neighbor in our first Kansas City home who had a dishwasher on her front porch for ages. The unraked leaves blew into our yard every autumn, and her son’s old sports car sat on blocks in our shared driveway, as well. It was all a terrible eyesore, but I was too busy juggling a preschooler and an infant to mess with it, and we eventually moved to the more pristine Kansas suburbs where the Home Owners Association regulates the color of house paint and the height of a fence, and there’s a ban on dangerous breeds of dog.

What goes in some neighborhoods is a no-no in others, and there’s no universal agreement on taste when it comes to what’s acceptable. As one friend commented on Facebook, Mary’s neighborhood is not Calabasas! (And if you don’t know where that is, congratulations, you don’t watch Keeping Up With the Kardashians.)

Here in Los Angeles, neighborhoods are more eclectic than in the ‘burbs—except in Santa Monica where I wasn’t allowed to lock up my bike on the patio outside our front door. On the hilly, twisty street where we live now, there are a few eyebrow raisers. Like the house that has had solar Santa lights in the front planter alongside the succulents for the last two years… or the lady who keeps her pumpkins out well after her inflatable St. Nick appears on the roof. Then there’s the yard where an old car and trailer seem to have settled in for good, collecting dust and bird poop aside an otherwise nice abode. I can only guess the city has its hands full with more crucial matters.


Our last home was in an unincorporated area of LA County where zoning is iffy. The homes range from large, lovely and landscaped, to rundown, rusty campers. It’s a bit like the Ozarks only in the Santa Monica Mountains. 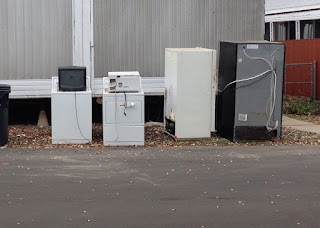 That’s where the lawless landlord across the street dismantled what we thought was a small house (but turned out to be a mobile home in disguise), and left its innards on the curb. A washer, dryer, two refrigerators, television and microwave oven mocked us every time we left the house or looked out the front window.

The neighborhood HOA was ineffectual. Our landlord was worthless. I reported the transgression to the county—more than once—to no avail. The holidays were coming and I was mortified that our kids, who had yet to see our home, would be welcomed by such blight, but we had no recourse. Except to amuse ourselves. 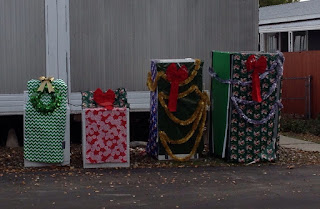 Under the cover of darkness, John and I wrapped the appliances in cheap Christmas paper, garland and bows. It was still an ugly sight but at least it was seasonally appropriate and, eventually, the property owner removed his detritus. He then moved in a brand new doublewide. And we moved out.