“Do you think a woman will ever be president?” I asked my mother.

“I don’t know,” she said. “Honestly, I think a black man will be elected president before a woman will be.”

It was 1972. I was a 13-year-old girl fascinated by Watergate and the Equal Rights Amendment, and I would later go to journalism school on the coattails of Woodward and Bernstein.

My mother believed she and my dad were about the only liberals in our very Republican suburb on the North Shore of Chicago. She used to joke that the poll workers had to shake the dust off the Democratic roster when they came in to vote in a primary.

She and my dad grew up in hardworking, blue-collar households. Their generation was the first on both sides of the family to attend college and, in my dad’s case, even high school. My mother, Ruthie, was a registered nurse who stayed home with her children—at first. 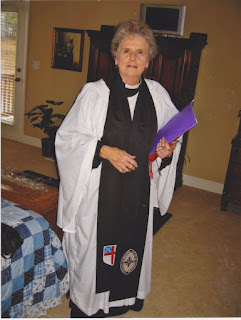 One day she was our carpooling, suburban mother who mimeographed League of Women Voters flyers in the attic and taught Lamaze classes on Wednesday evenings. The next, bolstered by the women’s liberation movement, she resumed her nursing career, went back to college and earned a Masters Degree. Later, Ruthie attended seminary, which led to her ordination as a priest in the Episcopal Church.

In that church, when we renew our Baptismal Covenant, the priest asks the following question: Will you strive for justice and peace among all people, and respect the dignity of every human being? To which we reply, We will.

The latter, in particular, serves as a clear differentiation between Hillary Clinton and Donald Trump (and I do believe she strives for justice and peace, as well). While Trump has demeaned Mexicans, Muslims and women, called people losers, been consistently divisive, and made insinuations about the size of his genitalia, Hillary has exemplified grace under pressure.

I am not a single-issue voter and I accept that in electoral matters there are often compromises to be made. Whether one disagrees with Hillary’s politics and positions on social issues, perceives her to be untruthful, or just flat out dislikes her is beside the point. Throughout the campaign she has been respectful, tactful and gracious—dignified. No name-calling, no publicity stunts, no muttered “nasty” comments under her breath, and no boorish behavior. There’s not much question as to who is more qualified to run our country and who will represent our country in a dignified manner that befits the office of the presidency.

My dad didn’t live to see Barack Obama elected President, but my mother did. I marvel today at her prediction to me way back in the early ’70s. That somehow she knew it was going to be an even longer, more difficult road for a woman to shatter enough good ol’ boy glass ceilings to find her way into the White House, than it was for a black man, despite our country’s ugly and shameful history of racial oppression and discrimination. My mother knew what it was like to be a woman in a field dominated by men, at times even serving congregants who didn’t respect or accept female priests.

Sadly, my mom is no longer here to vote on November 8, so I dedicate my no-Trump vote to her. There is no doubt in my mind who Ruthie’s choice would be and who it most certainly would not be. What delight she would take in seeing Hillary Clinton elected our first woman President, and in saying “Hell, no” (with dignity, of course) to Donald Trump!