Instead of going to the gym, I got my cardio when a hummingbird flew into the house. These birds are so dumb, I thought.

But then I remembered, I’m the dummy who routinely leaves the sliding doors open so the dog, a yellow Lab mix, can come in and out as she pleases. In other words, I’m lazy and I don’t want to get up to let Bella in and out every time she has a whim… which is about every ten minutes.


Leaving the doors open is one of the perks of living in a place without tons of insects. It’s a habit that never would have flown when we lived in Kansas. There, June bugs are bigger than hummingbirds. Like moths, they crash against the coach lights on the porch and invite themselves in if you so much as crack open the door to let the cat out. When the kids were young, we had what John called The Nightly Bug Watch.

“Daddy! There’s a spider on the ceiling.”

“Something’s buzzing in my room!”

As if my night owls needed any more excuses not to go to sleep.

It’s not the first time we’ve had a hummingbird in the house. Last time, the little iridescent angel fluttered her way up into one of the skylights. Yep, I’m pretty sure it was a “she” because, despite thrashing herself repeatedly toward the heavens, she couldn’t break through the glass ceiling.

We cooed and pleaded with her for an hour before she was worn out and agreed to sit on the broom John offered as a conveyance. He then carried her oh so gingerly, a princess on a sedan chair, and released her to freedom. 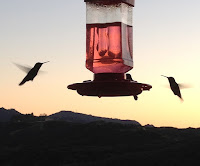 The fluttery home invasion was an annoying consequence of leaving the doors open. I was sure it was a onetime thing and reasonable tradeoff. I’d begun to feel a mystic connection to the thrumming throngs who spent their days slurping homemade red nectar from tacky hardware store feeders on our deck.

My Grammy would have had a canary. She said a bird in the house means there’ll be a death in the family. It was one of her many superstitions. She had a conniption if anyone opened an umbrella in the house and refused to leave a place from a different door than she entered.

When something flew past the dining room table in a blur this morning, I thought it was a dragonfly. It took a left when it got to the kitchen and began flinging itself against the glass door in the living room. It was pretty—shiny and green with a tinge of bright pink. I wondered if its long, pointy beak could hurt me.

Why does this have to happen when John’s not here?

I jumped up and ran, slid open the screen door and fluttered the sheer drapes as my heart pounded, but I couldn’t coax the bird to the left, despite asking it nicely and reasoning with it.

“See? Just a little bit that way, buddy, and you’ll be on your way.”

As dainty as hummingbirds are, they’re brains must be miniscule. The thing was a mere three feet from freedom and didn’t understand any of my instructions, poor thing. So much for my delusion of having some mystical psychic connection…

I waved an embroidered throw pillow at it. It must have been tired, because it settled in the slivery track of the sliding door. I tried to urge it to the left again, this time with a New York magazine. I was afraid to make contact because it seemed so delicate. I was afraid I’d hurt it… or worse.

Suddenly Bella was in on the act. She’d been leaping at it from outside but now barreled into the house and pounced onto the spot where the bird was resting.

Bella backed off. The hummingbird didn’t make a move. I couldn’t tell if it was breathing; it seemed perfectly still.

Ugh. Either Bella squashed it or it just wore itself out and had a heart attack.

Now I’d be forced to touch it. I wasn’t sure how to dispose of the ill-fated hummer. My gut told me if I tossed it over the rail of the deck and into the slope-y canyon below that it would, at least, be returned to the wild and decompose. Nature would take its course. If that meant coyotes or crows or a Cooper’s hawk, so be it.

I went to the garage for my gardening gloves. I really didn’t want to touch it, but I wanted a dead bird in my house even less. A dead bird in the house! What would Grammy have said about this? 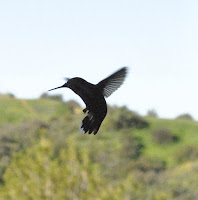 I picked up the fragile little birdie by the tail and carried it outside at arm’s length. Heart still racing, I walked quickly to the edge of the deck and flung it.

But instead of dropping onto the hillside below, the hummingbird beat its wings, took flight and disappeared into the hot white sky.