The Unsolicited Advice I Took to Heart

This piece appeared March 12, 2014 in the Huffington Post.
I was almost run over crossing the street the other day. Near misses happen in my busy neighborhood with alarming frequency, but this one came perilously close to flattening me -- closer even than the day a motorcycle drove right up onto the sidewalk. 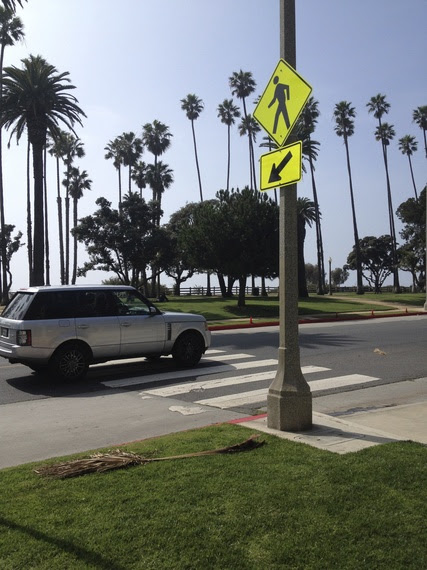 Despite the broad yellow stripes indicating a pedestrian crosswalk and the familiar, red, octagonal sign painted STOP, it was obvious the woman in the Mercedes SUV wasn't going to. When I halted in the middle of the street, she finally glanced my way and hit the brakes.
"Oh, I didn't see you," she said, unremorsefully as she rolled down her window. "I was just looking straight ahead."
(Didn't we learn in Driver's Ed to look both ways before proceeding into an intersection?)
"You didn't even come to a complete stop," I scolded, with upturned palms.
And that's when I heard the voice of a jogging stranger.
"Awwww, just keep walking," he snarled at me as he breezed past.
Translation: "C'mon lady. Who cares? Get over it."
The nerve of that guy! How dare he? The admonishment shocked me almost as much as nearly being flattened in the intersection. Somehow (divine intervention?), I managed not to tell him off, too. Probably because I was speechless for once. I took a breath -- and his suggestion: I just kept walking.
Later, it occurred to me that "just keep walking" is actually a good piece of advice... one that could serve me well in many situations. On my daily walks alone, the opportunities to practice "just keep walking" are endless. There are skateboarders shooting out of alleyways; poky tourists strolling four and five abreast making passing difficult; yappy, rat-like canines that bear their teeth and growl unprovoked at my harmless, lovable Bella; and dog owners who don't scoop their poop.
Often, I'm itching to set people straight because of what my husband calls my "corrective nature." I come by it honestly; it's in my genes, inherited from my late father who was both a teacher and an editor. (And whose metaphoric red pencil still occasionally looms over my shoulder.) But why bother pointing out the misdoings of complete strangers? Wouldn't it be better to save my indignation for things that really matter? For injustices like violence, racism and poverty rather than petty neighborhood annoyances? Oh, I suppose it can be temporarily satisfying to set someone straight, but what good does it do in the long run? Ultimately it's not my business if they change their ways or not. I've wasted too much psychic energy on corrective conversations, both real and imagined -- usually imagined, as I think of the perfect reproach sometime after the fact.
Variations of "Just keep walking" come in handy in lots of situations. Grocery cart blocking the aisle? Just keep shopping. Facebook post that's a not-so-humble brag? Just keep scrolling. Pompous cable news pontificator? Just keep flipping. Cut off in traffic? Just keep driving.
This new mantra, "Just keep walking," is a handy metaphor that extends beyond life's minor irritations into the realm of self-preservation. Sure, sometimes I'm compelled to speak up, either for myself or for those can't; other times, I simply need to walk away from harmful or toxic situations. To move on... let it go... shrug it off and say "So what? Who cares?" I need to accept the things I cannot change and I need to pick my battles.
A dear friend once suggested that particularly challenging people in our lives serve as teachers. We learn from them in spite of the aggravation. That jogger was one of those teachers. He taught me something... did me a favor, in fact, by reminding me to just keep walking. I still think he was kind of a jerk, but I'm glad I didn't tell him so.
Posted by Mary Novaria at 12:54 PM