I’ve tripped over dog leashes (not mine), dodged tackles from errant skateboarders, and nearly been clipped in the crosswalk—most recently by a motorcycle. But it’s the abject rudeness of pedestrians that’s got me throwing down the penalty flag.

Yes, walking has become a contact sport... I’ve been double-teamed, blocked, and nearly tackled just taking an innocent stroll with my dog, Bella. Thank God she’s on my side, because I can use her to set a pick.

Proper sidewalk manners have gone out the window in my neighborhood, where folks seem to find the very notion of keeping to the right abhorrent. It’s such a simple concept. Isn’t it one of the things we learned in kindergarten on our first forays down the corridors of grade school? Keep to the right!

But here they walk on the left… they walk in the middle… and they must be willing to be hip checked because they do not zig, zag or make any effort get out of the way. Whether they don’t know any better, or simply don’t care is hard to say but, for some, there just might be a wee bit of entitlement at play. 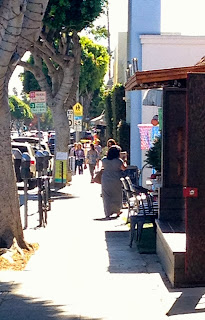 There's a posh little shopping district down the street where certain people are prettier, richer or more important than the rest of us—sometimes all three.  They’re apt to fall out the door of some smug boutique—flailing packages and laughing with their friends in that sparkly, cultivated way of the beautiful, wealthy and superior. If you’re not careful, they’ll stomp right over you in their footwear du jour—Tieks, Jimmy Choos, Uggs…whatever.

Recently, I’m walking along, minding my own business—and Bella’s—when I encounter a man and woman deep in conversation… facing each other… straddling the entire width of the sidewalk—sandwiched by the street and a salon. If only they’d raise their arms above their heads, Bella and I could play London Bridge is Falling Down. Of course I want to make a point. (My husband says I have a “corrective nature” when it comes to this sort of thing.) So I throw my shoulders back, quicken my pace and lead Bella through the human goalposts. Touchdown! They do not do the wave.

Around the corner, I get triple teamed. Three women—a bit older than I and certainly old enough to know better—head West as Bella and I proceed East. Three abreast they are, taking up the whole of the pavement. They natter and sparkle and flip their hair around, and I keep thinking the one most clearly on my side will give way… that she’ll drop back or speed up or somehow clear a path. But, no! She doesn’t budge and here they come—fast-talking and speed-walking—barreling straight towards me in some reverse and perverse game: Red rover, red rover, let’s knock Mary over… I stop in my tracks… I stand my ground (if you’ll forgive the expression)… After all, I have nowhere to go but into a privacy hedge. Finally, the one closest to me, the one with the flippy, pageboy haircut, turns ever so slightly sideways for half a second so I can pass. Please tell me I do I not hear HER expel an irritated sigh that echoes the sound of my own flabbergastery. Unsportsmanlike conduct!

Clearly, to survive in my ‘hood, I need more than moves like Jagger. Fancy footwork’s not the answer. No, I think I need to walk softly and carry a big stick. A hockey stick, maybe. Or a nine iron. And everyone else better strap on the shin guards.


"I like long walks, especially when they are taken by people who annoy me."