Proud of My Daughter and Hopeful for Women

My daughter voted yesterday for the very first time. I think I was more excited about it than Hannah was, although she took it very seriously, researching ballot issues, forming and articulating her own positions. In Cali that's no small task because we had 11 complex propositions on the state ballot alone--not to mention all the local stuff.

My mom voted yesterday in Kansas. At 81, who knows if she'll get another chance? She was firm in her Presidential choice, even though complicated ballot issues may stymie her these days. So maybe there's a little passing of the torch here...

When my grandmother was born, women in the US didn't yet have the right to vote. Today, it's a real possibility that our next President could be a woman.

I am so proud that Hannah cared... That she honored the right and the privilege won on her behalf by women of the past... That she made a commitment to the future.

Yesterday, Wisconsin elected a woman to the US Senate who happens to be a lesbian. Missouri re-elected a woman who had to battle a misogynistic ignoramus who missed school the day they taught female reproduction. In Massachusetts, Elizabeth Warren ousted the incumbent and, come January, will be another in a record number of female members of the US Senate.

Who knows what the future holds for Hannah...for all our daughters and granddaughters? But it feels hopeful and I feel proud. 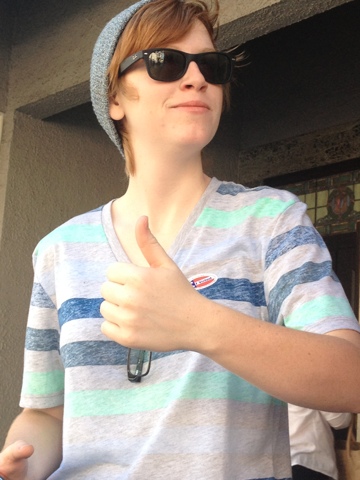