Years ago, just before our son began Kindergarten, we moved from the city to the suburbs—reluctantly, because we didn’t want to be one of “those” people. We also didn’t want our kid to be part of an experiment in a failing urban school district. Some friends in another city had done the same thing several years ahead of us and we asked them, “How long did it take you to get used to the suburbs?” The response: “About five minutes.” And so it was.

Now, 18 years, later, we moved across the country to the Los Angeles metro or, specifically, Santa Monica. It didn’t take five minutes to get used to this. And after ten days in this community, it took  about five seconds to come up with ten things I love about it already.

Ocean (Obviously). I can see the Pacific from the corner and walk there in 10 minutes.

Air conditioning. Courtesy of Mother Nature and the above-mentioned Ocean. We may never shut our windows again. 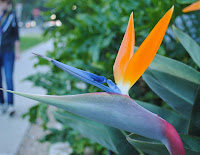 Mountains. Just a glance to the right while looking at Ocean (and a peek north through the alley)--with great hiking trails nearby.

Flora. Palm trees, succulents, birds of paradise and bamboo, to name a few.

Walking. Forget LA’s nightmare Freeway stories, in our neighborhood, besides restaurants, shops and movie theaters, there are two grocery stores in walking distance, including Whole Foods. 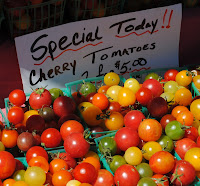 Dogs. Lots of dogs and dog friendly people. Most of them pick up their dog waste.

Farmer’s Market. Big on Saturdays, even bigger on Wednesdays when celebrity chefs like Wolfgang Puck are rumored to find the freshest of the fresh.

People. Most are friendly, helpful and generally in a pretty good mood. John says it’s because of the sunshine, moderate temperatures and low humidity.

Sunsets. There are no words…