Baggage Claim: I became a head case and bought the wrong suitcase 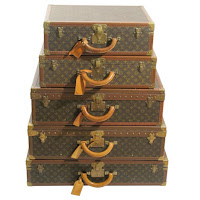 It’s not terribly original to call an oversized something “Big Bertha.” It’s so played and I suspect Callaway Golf has the name copyrighted for their ginormous driver. There’s a big hunter at our barn—part draft horse--called Bertha, as well. Otherwise, I’ve never personally known a Bertha (and I hope no one nowadays would give their daughter such a name), but that’s what I’m temporarily calling my new suitcase. Feel free to suggest a more imaginative name.

This big-ass suit case came into my life the evening before a recent trip to LA. Although I don’t fly out every week like some road warriors do, I’ve done my share of travelling and I’m really grateful for that. Most of it has been for what you call “pleasure,” although getting ready for a trip is rarely that. Shouldn’t it be easy to throw a few things in a suitcase and head for the coast? Not when my old nemesis “trip anxiety” sets in. Symptoms include the three “P”s—panic, procrastination and paralysis. For love or money, I could not decide what to pack. These shoes? That skirt? Those tops? Simple decisions were impossible and my bed was covered with stacks that would never fit in my lovely Vera Bradley “Yellow Bird” roller suitcase.

“Yellow Bird” has been to six foreign countries and four corners of the U.S. In fact, it held two-weeks of stuff during a summer trip to Europe. I only took two pair of shoes, an exercise in asceticism that would appall the Kardashians and, frankly, it horrified me a little as well. How the hell did I do that? Why the hell did I do that? I’ll tell you why: We were told we could only check one bag, that’s why. That travel underwear that dries overnight so you only have to take one or two pair? It really does. But I digress…

I have some lovingly worn Louis Vuitton luggage that belonged to my mother in law, a champion world traveler. She loved those Louis suitcases and often said that seeing them come around on the baggage carousel after a trip was like seeing an old friend. They’re very pretty and plenty roomy, but they have no wheels. I suspect Mom-in-law never actually had to lift one of those bags herself. So I did the only thing I could do at 8:30 p.m.--I went to Target, found Bertha, took her home and proceeded to toss in practically everything I own. Yes, I had to pay a ridiculous overweight charge (skyway robbery) for that extra seven pounds to Frontier Airlines. I coquettishly warned the guy gleefully swiping my credit card, “Don’t tell my husband!”

I managed to transfer about ten pounds worth of stuff to my carry-on for the return trip; the extra weight nearly killed me when I had to lug it about twenty miles all over the Denver airport. (If you’ve been there, you know I’m only exaggerating a teeny weeny bit.) 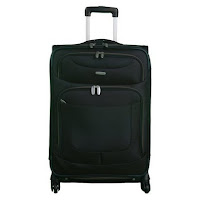 Today Bertha is in the cedar closet. I didn’t use very good judgment when I turned to her. I was taken in, believing bigger was better. I trusted Bertha and things got complicated and expensive. Bertha, it turns out, is not a very good friend. She mocked me with unwanted pounds, cost me money, and left me stranded overnight in Denver while she went on home to Kansas City without me. I’m not sure what the future holds for Bertha, but right now she’s just excess baggage. And more baggage is something I definitely do not need.