Kristen and I jumped into the rental car at Maui’s Kahului Airport. Primed for adventure, sunshine and Mai Tais, we were Thelma and Louise. Okay, so Brad Pitt didn’t tag along and our Alamo rental may not have been a ’66 T-bird, but at least it wasn’t a minivan.

While the iconic characters, played by Susan Sarandon and Gina Davis, had some significant legal troubles, the closest my cousin and I came to breaking the law was meandering off the trail in the Iao Valley State Park in search of a promised but elusive waterfall. Who could blame us? This was an escape, after all, a brief respite from daily pressures of work and family and, for Kristen, the looming cold, snow and darkness promised by another Alaskan winter. We needed to bank some serious Vitamin D.

One way to stay a step ahead of the law is to not drink and drive. That means grilled fish and frothy blended piña coladas at the condo… or a walk on the beach to happy hour and dinner. The sunsets are spectacular and, later, the stars speckle the sky like a zillion diamonds… but not enough to light the way home, mind you. It would be an exaggeration to say we actually got “lost” on the beach; we knew where we were. We just couldn’t find the unlighted public access in the dark, even with the flashlight apps on Kristen’s iPhone and my Droid. We climbed steps and scaled dunes, passing an amorous couple on a blanket—as well as the path we were looking for--several embarrassing times before we found our way. 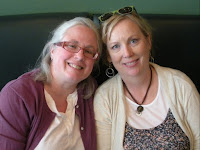 Thelma and Louise had morphed quickly into Lucy and Ethel. Maybe we should have used Ricardo or Mertz in Sarento’s a few nights later. Instead, we had a go at my husband’s ruse. He gives the hostess a phony moniker, often using “Kramer” as an homage to Jerry Seinfeld’s fictional, across-the-hall neighbor. But we couldn’t pull it off. When Kristen blurted out “Smith!” at the hostess stand, I started to giggle, telling the two humorless, well-coifed and stylish twenty-somethings managing the table traffic, “We’ve had too much sun.” Like Queen Victoria, they were not amused. 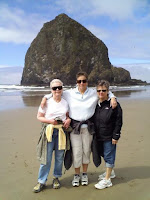 We had a few other Lucy and Ethel moments on Maui. For starters, our five-day gabfest caused us to miss a turn here and there… Our rental car—reminder: NOT a ’66 T-bird—apparently is common enough that we jumped into its twin, Americano and Latte in hand, outside a Starbucks… It probably wouldn’t have hurt to slap an “I brake for rainbows” sticker on our bumper... One of us is more comfortable killing giant cockroaches than the other...Outdoing the bugs were dozens of fist-sized, nocturnal toads sporadically sprinkled along the beach path (ewwww!)… And don’t even get me started on the lizards! We learned it hurts—a lot (very-bad-language a lot)—to wade through shallow water that covers pointy lava rocks… And how many times can someone drop an iPhone, anyway?

Thing is, neither of us is naturally clumsy or ditzy (even though I’m a blonde), especially Kristen. She is a successful entrepreneur, a Harvard grad and a gifted athlete. We come from hardscrabble New England stock. Our mothers—sisters--would never have found themselves in these ridiculous predicaments. It simply wasn’t an option for them. Their generation didn’t “go rogue” on their husbands and children, running off to Hawaii with the girls. To them, such an idea was crazy. Today we know we need these occasional escapes with other women-folk or we’ll go crazy. (And, note to husbands: Our constant banter did NOT disparage you in any way and we, in fact, are so very grateful for your blessings on these diversions of ours.)

In the movie, Thelma and Louise use their wits to stay one step ahead of the law. At one point, a cop says to his partner: “You know, the one thing I can’t figure out? Are these girls real smart or real, real lucky?”

Today, we women need to be smart enough to know when we’ve had enough. We need to take care of ourselves, to refuel and refresh. We need to model it for our daughters and maybe even for our mothers. Going to Hawaii is a fairytale. Sometimes, it’s more realistic to get a pedicure; have a glass of wine or a cup of tea with a girlfriend, a cousin or your sisters; or simply read a book and take a nap. As for Thelma and Louise, they were real smart and real, real lucky.