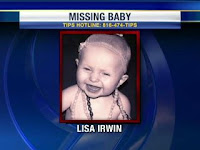 We’ve got a missing baby in our city. Thanks to the Amber Alert system, folks know immediately these days when a child is snatched. Our local TV stations are on this pretty much 24/7, which is both a blessing and a curse. News crews are working their tails off to feed the curious and ravenous masses.

And a feeding frenzy it has become…

News of missing children brings out the best and the worst in people. On the upside, there is empathy, prayer and a willingness to lend a hand. Downside? Jumping to conclusions, finger pointing and criticizing the police and the parents. Somewhere in the middle is morbid curiosity and armchair theorizing.

Personally, I have spent some time in all three places. It is so easy to get drawn in to the drama—a mother’s tearful pleas, helicopter views of the search, a neighbor’s speculation and live blogs. Faceook and other interactive sites create a sense of community… disunity, too, as people’s opinions differ on who’s to blame. I’m guilty of throwing out a speculation or two myself. It’s all human nature, I suppose. And we don’t seem to learn our lesson. “Everyone” thought Casey Anthony was guilty of killing her daughter. Everyone, that is, except the jury.

I think so much of our news feels removed and out of our control. Even though they say “all politics is local,” I know I feel completely helpless, as well as removed, from what’s happening in Washington. I’m discouraged about the economy, but am powerless to fix it. And overseas? As dispirited as I feel about war in Afghanistan, genocide in the Sudan, famine in Somalia, tent cities in Haiti, the world seems to have “attention fatigue.” I think it’s due to the fact that we have no idea what we, individually, can do about any of it. Besides, most of us—and I include myself in this—don’t know enough about many of these world situations to participate in articulate discourse, let alone offer solutions.

Our local reporters—the folks we see on the air every morning and every night—bring baby snatchings into our living room and into our hearts. We’re drawn in and even asked to help.

What mom can’t look at little Lisa’s sobbing mother and not feel her heart breaking? No matter what really happened, or what truths are revealed, this is a woman who has been destroyed.

I admit I keep checking KMBC’s website for updates, flipping on the TV. The parents were even on ABC's Good Morning America today and I've seen stories in the Huffington Post and on CNN. I’ve allowed it to become a huge distraction. I don’t know what I expect to find out. I’m hoping and praying for the best, while semi-expecting the worst.

I don’t know what today will bring—when it comes to this missing child, or anything else for that matter. So I’m going to try to get on with my life, hug my loved ones, count my blessings, stop channeling my inner Nancy Grace and wait…