What Boob Came Up With Nursing Doll? Adjust your bra straps, parents. “Breast Milk Baby” is on the way. This 21st-century answer to Betsy Wetsy makes its US debut later this month at a toy industry trade show in Las Vegas.

BMB is a baby doll that simulates breastfeeding when its pretend mommy—i.e. our daughters and granddaughters, nieces and little sisters—clutches it to her chest. According to ABC News, “The doll, which comes with a special halter top with two flowers positioned where nipples would be, makes suckling sounds when its mouth is brought close to sensors embedded in the flowers.”

Seriously? Flowers where nipples would be? That getup sounds suspiciously stripper-like. No wonder they’re debuting in Vegas. What’s next, junior memberships in the La Leche League? 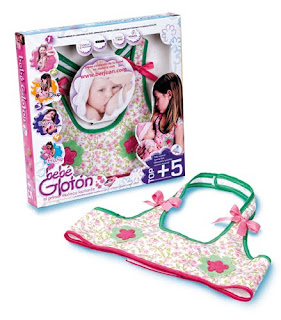 BMB is made in Spain. Did someone forget to do the market research here in the USA? Don’t they know that Americans are still freaked out when a woman breastfeeds in public? Yep, we’ve got plenty of porn and strip clubs and Hooters, but God forbid a woman feed her baby on the subway.
Even though I am a “breast is best” proponent from way back, I believe breastfeeding is a matter of personal choice. Some women do, some don’t. That’s their business. I nursed my son for 10 months, my daughter for 16, and I still have dreams about breastfeeding and driving at the same time. (There actually was a news story a couple of years ago about a woman who got pulled over by the police for this, but I swear I never did it in real life.)
Kids have great imaginations and lots of their play is in imitation of grown up behavior. They’ll pick up the TV remote and call it a cell phone… or turn a big cardboard box into a rocket ship… or shoot you with a banana gun… or play doctor… It’s just what they do. Toy makers take their cues, often with sexist results, from children’s desire to imitate grownups,—kitchen sets and Easy-Bake Ovens for girls, construction tools and Tonka trucks for boys.

I’m sure lots of girls over the years, and even some boys, have pretended to nurse their baby dolls—and bottle feed them, for that matter--because it mimics what Moms do. I see nothing wrong with that, but we don’t need a specialty doll to push it, either. Check out the manufacturer's website and you'll see that there are also accessories to go with the doll, including a cradle, a breastfeeding pillow and a toy breast pump. A toy breast pump?! Why not throw in breast pads, a nursing bra and some lanolin for sore nipples while they're at it? To the company's credit, they do make both boy and girl BMBs, as well as light and dark skinned babies.

“Even pediatricians, child development specialists and toy experts can't agree on whether the doll would be healthy for young girls,” reports ABC News.

One could argue that because breastfeeding is healthy and oh-so-natural, there is nothing wrong with children emulating this form of maternal nourishment. I see two major issues here. First, breasts are not toys. Granted, there are adult situations where they may be considered toys, but that’s clearly not what we’re talking about here. Second, we, as a society are doing everything in our might to turn our children into little adults. They are not just miniature versions of us, despite wearing mature, skimpy clothes, listening to sexualized music and playing violent video games.
I want to be clear: I don’t think BMB is about sexualizing girls, per se, because breastfeeding is not sexual. It is nourishment and nurture. But this doll does raise questions about gender roles. Of course it does, you say, men cannot breastfeed. Not yet, anyway, but you know some mad scientist somewhere is working on it.

Girls need to know there’s a lot of life to be lived between being someone’s daughter and becoming someone’s mother (if that’s what they choose), and that it has a whole lot more to do with what’s in their heads and the size of their hearts than in the functionality or size of their breasts.
Posted by Mary Novaria at 3:19 PM