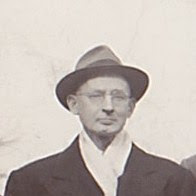 My grandfather Charles McAleer was born in County Tyrone, Northern Ireland in 1887. He climbed out the bedroom window of the family farm in 1905 and eloped to New York City with an older neighbor girl. His Mum did not approve of their relationship. Charles’ wife died in 1910, leaving him with one, possibly two, young children. He took his daughter, Rose, back to Ireland to be raised there by his mother and sisters, returned to New York, and soon married my grandmother. Together they had four more children; my father was the youngest. I’d never even seen a family snapshot of my grandfather until recently when I found some old photos in a box in the basement of my mom’s condo. He died before my parents ever met. If my mom knew more about Charles at one time, she no longer remembers.

Fathers are so formative that to not know one is to feel like a piece is missing from a jigsaw puzzle. You can still see the big picture, but there’s that one important detail missing. Because of that, it’s an opportunity begging for one’s imagination to run wild. Was my grandfather a mean drunk? Was he abusive to his children? What anger went unresolved between my father and his? Was my grandfather proud that all three of his sons graduated from college? Or did he feel inferior because he didn’t? Maybe he was a sad, bitter man who had lost the love of his life too early and made his best effort at starting over…

Just as I am not a perfect mother, I didn’t have a perfect father. He was a perfectionist with a big personality. He was smarter than most people and didn’t mind flaunting it. My dad was a teacher—high school English--and then an editor of high school text books, so I was frequently subjected to both his literal and figurative red pencil. (Speaking of pencils, he did not like the way I held mine and, along about the third or fourth grade, insisted I correct the position of my fingers on my No. 2s.) He was an exacting grammarian who would quiz me not only on English but Latin and French. There was no winning an argument with my dad. He could reduce me to frustrated tears by both maddening logic and mockery. I’d retreat to my room, licking my wounds until my mom urged me to make peace. “You know you’re going to have to make the first move,” she’d say. As infuriating as this was, it helped me formulate my own parental code: When I am aware that I have wronged or hurt my children, I admit it and apologize. It’s important for them to know that parents are human and make mistakes. That none of us, no matter how much we wish it were so, is perfect.

There were times when I felt cherished by my dad. I remember him taking me to lunch for my birthday and playing that early video game “Pong” while we waited for a table. When my brothers and I were little, Dad made up “Baseball Pete” stories and sang to us at bedtime. He taught us to play poker on camping trips. At least once a year, he’d pull us out of school for a field trip to the Art Institute of Chicago. He took us to hear the Chicago Symphony every summer at Ravinia. He instilled in me a love of literature, art and music.

One of the greatest transitions for my dad came as he moved from being a very religious man to a deeply spiritual one. He remained a Roman Catholic until the day he died, but his journey was greatly influenced by Native American and Twelve Step spirituality. In the last years of his life, he became very interested in healing prayer. That would become the thing that ultimately healed my relationship with my dad as we read and discussed books by Francis MacNutt and attended a healing prayer group together. He would ask me to pray for him and with him with great regularity in the final year of his life. I felt loved and respected. I was with him ten years ago when he left his earthly body and was finally set free of ailments that had plagued him for years.

Above all else, my dad still remains, in spirit, a great teacher. One of the things I learned from him (from both of my parents) is that it’s never too late to change course—whether it’s a mid-life career change, learning a new skill or embarking on an enlightened spiritual path—as long as we’re on this earth there’s still time to change for the better. In a world where it’s often easier to take the path of least resistance… to remain stuck in bad habits… to be content with mediocrity… to be resigned to injustice, war and poverty… my dad taught me that complacency is not an option. Carpe diem, he would say. Thanks to him, I know what that means. Seize the day!