A Mose by Any Other Name... 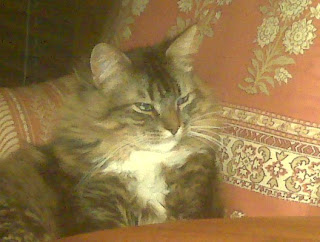 It’s finally happened. The proverbial “better mousetrap” is here and his name is Mose.


Mose is a great big furry bundle of a cat who may or may not be a Maine Coon. My mom says he is, but we don’t have any papers to prove it. We are Mose’s fourth home since being adopted from the pound as a kitten nearly four years ago. Mose is also on his fourth name—fifth, if you count the month or so we called him simply “Big Kitty.”

Earlier this year, we took him in because my mom could no longer care for him. She had “inherited” the feline from a neighbor, whose mother had given him to her. The neighbor’s mom had named the cat Thumper. We think he was named after the bunny in Bambi, although it takes just one day with this cat walking on hardwood floors to know there could be another reason. Due to his considerable girth, you can hear him thump-thump-thumping from room to room. My mom does not care for cartoon cutesy, but she does go for all things Irish. After having Thumper for more than a year, Mom started calling him Liam. It seemed reasonable to her since the cat she already had was named Seamus. Seamus' littermate had been Bridey. A previous pair adopted as Mickey and Gypsy were redubbed Bridget and Kate. You get the idea.

I got Thumper-Liam’s records from the vet and discovered that his animal shelter name had been Duffy which, besides being kind of Irish, was also the name of my very first cat as a young girl. By then, however, we’d begun to call the Big Kitty Mose. You could say it’s short for the Old Testament’s Moses, but really he’s named after the simpleton Mose Schrute, cousin of—and co-owner of the beet farm with—Dwight Schrute of NBC’s The Office.

To our knowledge Mose had always been an indoor cat. He looks like the kind of cat that would be kept indoors, brushed and pampered, fed his dinner in a Waterford dessert glass like the Fancy Feast kitty in the cat food ads. You can almost see a bubble over his head mimicking the old shampoo commercials, “Don’t hate me because I’m beautiful.”

After about a month in our home, Mose started trying to sneak out, mostly into the garage. Soon, however, he became obsessed with getting out the “pet proof” screen door onto the deck and thus the backyard. (This “pet proof” door has been repaired at least three times.) One day I heard a forlorn mew and found Mose half out the door, his body stuck, his front legs in the air above the deck and hind legs in the air above the kitchen floor. We took the door in for another repair, bought Mose a collar and tag and decided to let him do what comes naturally. For the first couple of weeks he stayed in the backyard, and then began to venture just behind the fence to hang out under the boughs of a huge evergreen. We soon began to see him slinking through the grass in the yards on either side of us. Mose was spreading his wings and, as all children do, venturing farther and farther from home. His instincts were beginning to take over.

About two weeks ago, Mose started to hunt—or least that’s when we became aware of his hunting. I remember our old Duffy, a prolific mouser, once dropping a huge Blue Jay on the Oriental rug in our dining room. I realized early on that our pets honor us by bringing us their prey. So it was that night, a few weeks back, as the dog went out for the last time and we began to turn out lights and lock doors, that Mose first deposited a small field mouse at the back door.

Our other cat, DaisyBelle, is about 17 and has slowed down considerably so it’s been a while since we’ve had one of these little presents greet us at the back door. There have been chipmunks, baby bunnies, baby birds. Usually, with DaisyBelle, the carcasses were headless. Not so with Mose; he seems to shake them to death which leaves them pretty much intact. To date, Mose has delivered seven of these trophies to the kitchen door, each one laid belly-up with its pointy grey snout showing the tips of its sharp little cuspids. Eek, a mouse.

I don’t like rodents. We never had gerbils or guinea pigs or hamsters as pets. I barely got through the Skinner box phase of college psych with my lunch intact. I really don’t even care for Mickey Mouse. Still, as a mom, I feel a little sad for the mouse mommies and wonder just how many mouse families have been affected by Mose’s newfound blood lust. Bottom line, though, the things give me the creeps. John isn’t always home when the gifts arrive so I have to suck it up and remove them myself—another good re-use for plastic grocery sacks.

I wonder how many more mice will lose their lives to mighty Mose. The summer is young and the world is his oyster, or at least his mouse-filled field of dreams.
Posted by Mary M. Novaria a.k.a. "Mims" at 6:53 PM