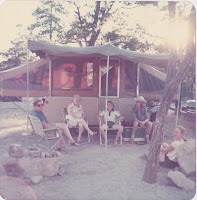 One of the ways we have failed our children is not getting them into scouting. They never asked and we never offered. While other kids were joining Daisy Scouts and Cub Scouts, our kids were playing soccer and channeling Michael Jordan in the driveway. John’s brother Nick, in his fifties, is still extremely involved in scouting even though his three Eagle Scouts have moved on. Nick still rocks that Scout uniform like a teen and does a fine spiel on Lord Baden-Powell, the revered founder of the Boy Scouts. Clearly John lacks the scouting gene in his family, as do I.

I was a Girl Scout drop out. I lasted until 7th or 8th Grade. That’s when I got kicked out for telling dirty jokes. Well, that’s not entirely true. I did get called out by the leader of the Cadets when she overheard me telling a dirty joke to another girl during a meeting in the basement of the local Methodist church. She may even have phoned my parents to tattle on me. So, basically, I slinked away from scouting in shame, unable to look that woman in the eye. I wonder, what was that joke and would it even be considered risqué today?

My husband also left the Scouts in shame. He stabbed a kid. Now, if you know John today, this is really hard to imagine, although brother Nick might disagree. John must have been really carried away that day, maybe just happy to be out of the house or something. His mom would definitely not have approved of running through the house with sharp objects. To be fair, no mother would. As John tells it, they were cleaning camping gear and mess kits in the basement of his local Methodist church (Wesley brothers now rolling in their graves). He and this other kid, whom he describes as a gentle soul, were horsing around and John began chasing his fellow Scout with a butcher knife. The other kid slammed on the brakes. The laws of physics prevailed, the body in motion remained in motion, and John plunged the knife into the kid’s back right between the shoulder blades. He says there wasn’t much blood.

My scouting career began with Brownies. I loved every meeting, beginning with “Clink clank, clink clank, our Brownie gold is in the bank,” and ending with the song “Make new friends, but keep the old, one is silver and the other gold.” (They liked their fine metals, those Brownies.) We did arts and crafts projects. My favorite was embroidering tea towels that we donated to residents of an area nursing home. I still remember mine was yellow, gingham checked and I loved learning the fancy chain stitches and knots that resulted in perky flowers on the fabric. The very best thing about Brownies was Christmas caroling. We wore red felt capes and got to add a white felt angel for participating.

At least one of my brothers was a Boy Scout. I think they both were Cub Scouts. What I remember most about it is the Pinewood Derby. My brothers always made their own cars with no help from Dad, and you could tell. Other kids had these sleek, polished designs that looked like models for next year’s auto show. Needless to say, the boys didn’t bring home any trophies from this event. My brother Sean stayed in scouting long enough to go on one of those long summer trips to Wyoming. Maybe he just got sick of it after that.

Under my Dad’s tutelage we were all pretty good campers, anyway, so maybe we didn’t need scouting. Considering my Dad was born and raised in Harlem, and that he had a notoriously bad back, it’s a little odd that he took to camping. We began with an old army surplus tent and eventually graduated to a Starcraft trailer—the kind where the tent pops up out of the camper bottom. We pulled that thing all over the place with a Sears canoe strapped to the top of the car. My Dad imparted camper wisdom to us--“A good scout always leaves the campsite cleaner than he found it”—and always had several rubber bands around his wrist in case he needed them. Be prepared, etc. For what, I do not know.

No matter how rugged we got with our camping—we cooked over open flame, wore bug netting, and hiked for miles—there was one thing my parents would not sacrifice to the wilderness experience and that was coffee. They did not care for the cowboy coffee fixed in a tin pot over the fire. The solution: Send Mims to the ladies bath house to plug in electric percolator brought from home. Yes, each morning, I was dispatched to the nearest source of electricity.

It seemed like it took forever for that blasted pot to stop burping coffee up into the glass knob at the top. I would lean against the cool tile wall, arms crossed, scowling in embarrassment until the coffee was done. Oddly, rather than thinking we were ridiculous, people were actually impressed! Still, for me it was mortifying, more humiliating than being kicked out of the Girl Scouts. I should have taken Lord Baden-Powell’s advice: “A scout smiles and whistles under all circumstances.” Come to think of it, that’s advice I could use every day.