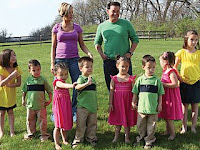 Jon and Kate’s proverbial 15 minutes of fame have stretched farther than a belly full of sextuplets and the only way to stop this labor of un-love is for them to get out of this show now and get out quick. Emergency C-section: Cut and run, Jon and Kate! Run as fast as you can to Dr. Phil and fix your marriage.

Both Gosselins were pregnant with resentment in last night’s season premiere. Kate was pretty much in her self-righteous character, telling us how mad she is and taking every opportunity to point out that she did not get any help from Jon, who had “taken the weekend off,” putting together the birthday party. Jon, by contrast, seemed dejected and depressed, and looked like he wanted to melt into the “love” seat—a new piece of furniture that’s, mockingly, a little bit wider and a lot less cozy than the one used for interviews in previous seasons.

Check out the reruns on TLC. Besides the irony of the new seating arrangements, Kate has transformed from one tired, sweats-clad Mama, who admittedly has no sense of style, to a full-fledged celebrity complete with a French manicure, fake tan and a signature hairdo. She actually said last night when the tears began to flow that she didn’t want to mess up her makeup!

Kate appears to be thriving on the road, meeting her peeps and signing copies of her book. Jon, on the other hand, now knows what millions of women have known forever: Despite the astronomical and unconditional love you have for your kids, it’s not always easy or fun to be the one at home wiping bottoms, filling sippy cups with apple juice, and driving the carpool with cramps and a migraine. He feels stuck. He says the choice was made for him.

Kate does not appear to have any compassion for his plight and says, “Yes, I travel here there and everywhere because that's my job."

Well, Kate, so is raising eight children. If it weren’t for them, you wouldn’t have the TV show or the book deal or, dare I say, that huge house you and Jon bought last year. Please don’t misunderstand, I do not have a problem with working mothers. Not at all. I do have a problem with Kate’s my-way-or-the-highway attitude and her apparent lack of appreciation for Jon’s domestic role. It is reminiscent of a time, not too long ago in our culture, where men went to work and expected to come home to a perfectly serene and clean home where the children were seen and not heard and dinner was on the table, served by a wife who had taken time to “pull herself together” before meeting hubby at the train. It wasn’t right then, and it’s not right now even if it is Kate wearing the pants. If you’re not familiar with this lifestyle, watch an episode of Mad Men or ask your mother.

The proverbial elephant in the living room here is whether Jon or Kate or both have cheated. It’s none of our business; it’s between Jon and Kate. Sure, they have put their lives out there on the flat screen for all to see but, up to now, they have been careful to keep it about the kids, as evidenced by the fact that their bedroom is off limits. Jon is right, some things need to remain between them. This issue is a big one but it is private.

One other glaring omission in these recent public conversations is any evidence of the couple’s faith. How often in the past have they talked about how “blessed” they have been? How many churches have they visited giving inspirational talks? Note that the book-signing in last night’s show appeared to take place in a Christian bookstore. And it was just eight months ago that the couple renewed their marriage vows in front of God and everyone. Is their relationship that fragile? Built on a house of sand brought back to Pennsylvania from last summer’s Hawaiian vacation? I sincerely hope not.

Despite how well you think you know someone, you never really know what goes on in another couple’s marriage. Ever been surprised when a couple you know splits up? Or if you find out someone’s had an affair? It’s just not that uncommon for families to show one image at the kids’ ballgames and piano recitals, while quite another lurks behind the welcome mat, designer wreath and brass door knocker. Despite the fact that viewers may feel like we really know Jon and Kate Gosselin, we don’t. We see only snippets of their real lives in an artificial context, once a week. From potty training to dental visits to soup making to Kate’s little “love pats,” viewers feel like we know more about Jon and Kate than we know about our own neighbors. And maybe we do, but it’s not the whole story.

Jon is clearly overwhelmed by the onslaught of media attention, while Kate seems to be lapping it up like that peanut butter frosting on the kids’ birthday cake. Jon reiterated last night that they originally began the series as a way to document their children’s lives. What are these kids going to see when they look back at these shows? An angry mother, a dad who’s skulking around in the background of their fifth birthday bash, and paparazzi hiding in the trees snapping party pics of every scowl.

Who knew that a humble, little cable show would grow from a goldfish bowl into the Shedd Aquarium, complete with the circling sharks? If Jon and Kate don’t pull the plug on this show, their marriage will almost certainly go down the drain and it’s going to happen with our noses pressed against the glass.