Close Encounters of the Palin Kind 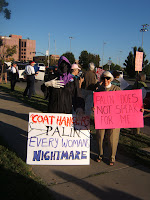 Sarah Palin is one of the most polarizing characters in modern history. (Just ask the polar bears.) Folks seem to either love her or loathe her. Honestly, I have tried to avoid discussing her with conservative friends because I realized about 24 hours into her candidacy that Palin—someone I admit I had scarcely heard of just days before—somehow had the power to injure valued friendships.

In three very brief encounters in the last few weeks, three female friends who aren’t voting for Obama responded in three different ways when the subject of Palin arose. The first is a college educated, NRA supporting wife and mother who lives in a rural area outside Kansas City. “I love her attitude,” my friend said of Palin. The second, a suburban working mom working on her second Master’s degree, angered quickly and attacked Obama when a third friend snickered over the Katie Couric interview. The third friend has a Master’s, two grown children, a recently retired husband, and is the kind of “do gooder” you’d think would be a Democrat. She, too, immediately attacked Obama as a “liar,” and subsequently admitted she will just keep her head in the sand during the remainder of the campaign.

I live in Johnson County, Kansas. I know it’s likely I have many other friends who either think Palin is the next great thing, or will vote for McCain Palin anyway because that is the Republican ticket and they vote Republican. Period. Democrats here are usually surprised to meet other like-minded folks. Just yesterday, I met a mom who was just thrilled to know she “wasn’t the only one.”
Nightmare on Main Street 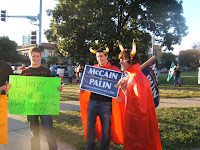 I took my daughter and her friend—sophomores in high school—to a Palin Protest rally at Kansas City’s JC Nichols Fountain, a landmark on the Country Club Plaza, an upscale dining and shopping area. We saw firsthand that there are women out there who are really angry about Palin. Not all, but most of the angst centers around reproductive rights and Planned Parenthood was on hand with signs and petitions.

My daughter and her friend carried a straightforward sign that said “We cannot allow Sarah Palin to take away our right to choose!!” One woman handed out coat hangers to everyone in the crowd as a somber and symbolic reminder of the pre-Roe v. Wade system of abortion. A woman dressed as the grim reaper carried a sign that said: “Coat hanger Palin; Every woman’s nightmare.” Someone with a bullhorn and another with a sign implored drivers-by at this busy intersection to “Free Levi”—the father of Bristol Palin’s unborn child. (It’ll be interesting to see if Levi and Bristol really do marry if the McCain Palin bid fails, but that’s another story.)

A couple of really bizarre things happened at this rally. About half-way through, four young men (20-ish, I’d guess) came marching across the park. First, we just saw they were carrying McCain Palin signs (“borrowed from someone’s yard, perhaps?). As they got closer, we could see two of them were dressed like devils—red capes and horns. They were demonizing McCain Palin, not supporting them! That was creative and fun and provided some much needed comic relief, because by now, there were some “challengers” on the scene. 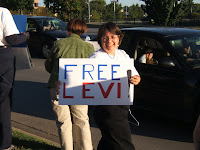 Hard to say if this was one family or not, but a couple of adults and a slew of kids approached. The presumptive patriarch said to one of his young girls, “These people think we should’ve aborted you.” First of all: Not true. Secondly, what a charming, loving thing to say to your daughter. This guy (I will not call him a gentleman) claimed, “You people just want free sex and free love and a return to the hippie days.” Huh?

I quickly realized after I, and others, tried to explain that’s not what “choice” is about that there was no arguing with this one. He was creepy and told us we were “the bottom of the gene pool.” In the meantime, a woman with him (wife?) was staggering around drinking beer out of a water bottle. The 18-year-old son tried to get into it with my daughter and her friend over guns and abortion and actually suggested that if women carried guns they wouldn’t be raped. I told you it was bizarre!

In the meantime, one of the young girls with these folks saw the McCain Palin signs our little demons were carrying and mistakenly ran up to hug them—making a deal with the devil? Eventually, this motley group left us alone and clambered into a white stretch limo. You can’t make up this stuff. 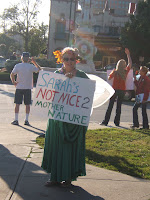 The right to choose is not the only issue these women—and not a small number of men—are rallying around. They are angry that anyone thinks they’d vote for Palin just because of her gender. They are angry about shooting wolves from airplanes. They are angry about her lack of foreign policy experience. They are angry about Palin’s reported belief that dinosaurs and humans co-existed as recently as 4,000 years ago. They are angry because they don’t think she’s very smart (“Stupidity is a threat to national security”). They are angry about her lack of support for the environment (one protestor was dressed as Mother Nature). Many are just plain angry and brandished mean-spirited angry signs to prove it, calling her an “animal killing baby making machine” and warning “don’t let this snake bite you in the ass.”
The most straightforward sign and probably the one that sums up the general consensus: “Palin does not speak for me.” Darn right. I don’t have to get back to ya on that one.
Posted by Mary M. Novaria a.k.a. "Mims" at 9:34 AM