Yea, though I walk through the valley of the shadow of Brokeback Mountain…

I was home for three straight days with two sick kids. One was diagnostically sick. The other had the sort of m 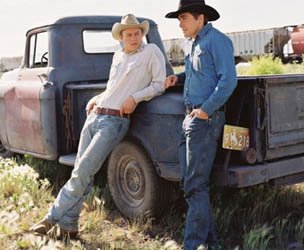 ystifying malaise that might prompt me to take a mental health day—but just one. It should be noted that even the truly sick one wasn’t sick enough to restrain himself from tormenting the other. And on the third morning of trying, unsuccessfully, to coax (threaten, shame, coerce, bribe, blackmail) my almost-thirteen-year-old daughter to middle school did me in. The poster child for power struggle.

I became ill with bad parent syndrome. Symptoms include serious doubt, second-guessing and self-loathing about everything the child has eaten, said, watched, listened to, done and thought about doing in the last week, plus regrets about allowing the adolescent to make her own choices instead of locking her up in her turret.

Thus I spent this third day hostage more to my own self-inflicted angst than anything else. Was there enough Zoloft (or ice cream) in the world to rid me of my downward, despondent spiral?

Those who don’t know me well may believe I am an extrovert—a veritable people person. They don’t know about the dark side. The introvert who craves her time alone… who, even though she adores her kiddoes and loves the laziness of the long winter break, has been known to do the happy dance when school finally resumes after New Year’s.

My kids were sick. What kind of a mother was I to resent that? What’s worse? Those feelings of resentment… or the guilt and shame of having those feelings? I needed to escape. And when my beloved came home from the office, I did.

I’ve wanted to see Brokeback Mountain since it was released. My husband did not. So at four o’clock on the third day of sickness, I left the patients and went to the theater. Popcorn. Diet Coke. Alone at last… except for the two other people in the theater. It was luxurious.

I think I was trying to escape my parental brooding, and myself rather than get away from my kids. I was already halfway heartsick going in, disgusted with my selfish self. This movie hurts so damn much. Brokeback took me from halfway to all the way heartbroken. It may not have been the “joy choice” I needed to really recharge and come home all cheery and “present” for my family. (I needed a hot bubble bath and a martini before I could face any of them.)

Brokeback is staggeringly brilliant and beautiful. It is not, however, what my parents used to call a “Friday night movie”—a light, mindless genre that serves as a release from the rigors of the rat race. Brokeback is a Sunday afternoon movie—a rainy, foggy, hide-under-the-covers Sunday afternoon movie. It may be the most painful film I have ever seen. In the hours since, I’ve had to keep reminding myself that it is a story… that I am the audience. Brokeback is up there on the screen. And yet, it’s not that simple. Somehow I am there, or at lease a part of me is there, on the mountain, breathless with the loneliness and pain of a stark longing to reconnect one half to another and somehow become whole again. God, I wish I knew how to quit it…
Posted by Mary M. Novaria a.k.a. "Mims" at 4:30 PM