My Friend Thinks I Don't Work Because I'm a Writer

It was just a casual conversation, and although I bristled when I heard the words, I didn't say anything. I didn't argue, I didn't set her straight. I can't even tell you why. But later, I couldn't stop thinking about what my friend said. She asked for a favor.
"You're not working, so you probably have time to..."
"Of course I'll do it," I said.
Later I realized that, in my reticence, I'd let my friend believe she was right about me. I wondered, is this what non-creatives think of writers? That we don't work? When, in fact, we are working constantly, whether or not our word counts, publishing credits or bank balances reflect it.
Click HERE to read more!

Up the Ante on Exposing Yourself

The retreat leader, a New York Times bestselling author, had scribbled those six daunting words in blue ink and all caps across the back of page seven. I already felt plenty exposed. Not only had I laid bare the first ten pages of my fledgling memoir, I was revealing my work to eight strangers who, like me, had found their way to an idyllic Montana town for Laura Munson’s Haven Writing Retreat.
Each of us had answered Laura’s call to “take a stand” for our writing. I felt bold and empowered at first, but as I left my shoes by the door and stepped into the main lodge of the Walking Lightly Ranch, I felt naked and vulnerable. What if I were exposed as a fraud? Revealed as one who merely pretended to be a writer, but who wasn’t one… not really.
Click HERE to read more!

To Tell, or Not to Tell

Ex-con, kitchen and craft maven Martha Stewart’s daughter, Alexis, has written a revealing book about growing up with her mommy dearest. Stewart says the book is all in fun, one big joke. Maybe. I’m sure Alexis will laugh all the way to the bank.

Remember what Frank McCourt said at the beginning of Angela’s Ashes? 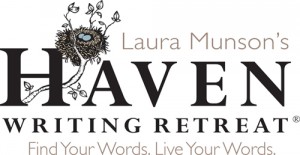