Mary Novaria is a regular contributor to the Huffington Post and has been featured in HuffPost50, ThirdMetric, Parenting, Entertainment, Books, Healthy Living, Arts & Culture and GPS for the Soul.

I was careless with my skin as a teen and now I’m terrified of getting skin cancer like my father.
Even though my fair, Irish skin would freckle and burn it didn’t stop me from trying to achieve that golden glow featured in glossy magazine ads for Hawaiian Tropic and Bain de Soleil. I envied my girlfriends who tanned so easily and were burnished and brown after just one afternoon at the pool or the tennis court.
My mom brought what we used to call “suntan lotion” on family vacations. The smell of Coppertone still takes me back to Hampton Beach on the New England shore. In fact, those Coppertone billboards with a little dog pulling down a blond, pigtailed girl’s swimsuit bottoms were a staple of my childhood.
CLICK HERE TO CONTINUE...

Grass has begun to grow in Los Angeles after just two days of steady rain. At the top of our street, tender, green shoots have sprung up on a brown, dusty hill that's been hospitable only to the gophers.
Save for parks and golf courses, there's relatively little grass here. Unlike the suburban Midwest, where the houses around us had verdant lawns nourished by sprinkler systems, most of our neighbors here have replaced their grass with succulents and rocks. Still, there are a few holdouts and, three years into Southern California drought culture, I feel judgy when I see a well-watered patch of grass.
I'm fueled by Curbed LA, which regularly drought shames municipalities (Beverly Hills) and individuals (Tom Selleck and the Kardashians) for their disregard of our collective water conservation efforts.
CLICK HERE TO CONTINUE...

What Grieving My Mother's Death Taught Me About Gratitude

I'm currently mortified because I didn't send thank you notes after my birthday this year. The flowers have long since drooped and died, but other presents -- a couple of gift cards, an adult coloring book (very Zen), a cuff bracelet -- are tangible reminders of my negligence. It's not like me and I feel guilty. It's not that I'm not grateful. I am. And I was raised better than to blow off this time-honored tradition and most basic piece of etiquette.
CLICK HERE TO CONTINUE...

How I Let My Father Take His Secrets to the Grave 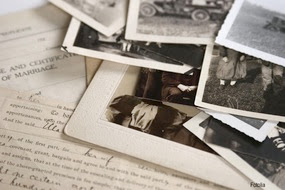 This is my fifteenth Father's Day without my dad.

He died of heart failure four days before St. Patrick's Day, a couple of months shy of his 79th birthday, and after a year of hospice care. He took his last breath quite peacefully while I sat by his bedside with my mother and Seamus, my parents' big, fluffy, orange and white cat. I was stunned by how clear it was that my father's spirit had left his body. Only his earthly container remained. A shell of him lay still and quiet and cool on the bed ... but he was gone. And so was a family history I'd neglected to plumb.
CLICK HERE TO CONTINUE...

How An Unexpected Encounter Turned Around My Lonely Mother's Day Weekend

I was on the verge of succumbing to a Mother's Day pity party. My kids and my mother live more than half a continent away. I ached with missing them and, frankly, I was feeling sorry for myself. I also had a vague sense of guilt for not being with my mom because, at nearly 84, who knows how many Mother's Days she's got left?
Although I'm a reluctant empty nester, I really do believe my kids are right where they're supposed to be -- and that my husband, John, and I are too. I'm grateful for the technology that keeps us so regularly tethered by phone, text and Facetime, but I miss their physical presence, their auras, their hugs, their interaction with each other...
CLICK HERE TO CONTINUE...

I'm Not Sally Draper, But I Could've Been

When Don Draper began showing up on Sunday night television, his visage shook loose the earliest memories I had of my dad. It's not that the "Mad Men" protagonist is my father's doppelgänger, exactly, but there are definite similarities. In many ways, the Drapers depicted on the AMC show, which airs its final seen episodes beginning April 5, paralleled my own family in a number of ways.
The Drapers lived in Ossining, N.Y., and so did we beginning in 1963. Before that, we lived in a Bronx apartment building on Fordham Hill, a place I hadn't thought of in years. But one glimpse of Don Draper in Season 1--complete with khaki raincoat, fedora and briefcase--and I was back on the 14th floor, watching from a window as my dad walked down the drive and toward the street. I imagined him turning around, looking up to wave, and adjusting the brim of his hat before heading to the train station a couple of blocks away.

What My Teen Taught Me About Friendship

10 Parents to Avoid at Your Kid's Sporting Event

4 Parenting Essentials I Learned From My Adult Kids

How I Embraced the Winter Blahs

My Friend Thinks I Don't Work Because I'm a Writer

Is Dementia the Grinch Who Stole Christmas?

Advice From Mom: It's Never Too Late... Until It Is.

Confessions of an Email Hoarder

We All Scream for Ice Cream: 31 Flavors of Marriage

The Unsolicited Advice I Took To Heart

To Grandmother's House We Go... Until the Stores Open

When It Comes to Redheads, Color Me Smitten

How My Anxiety Nearly Ruined My Family Vacation

What I Learned in the Move--Mama Needs a Village, Too

When My Mother Moved In

My Enquiring Mind Needs to Shut Up

Snow Days Force Surrender in the Calm After the Storm